Our directors tell you a bit more about their roles in Gloucestershire's Children's Services. 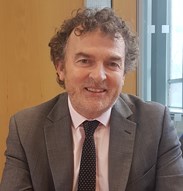 Chris began his career as a teacher in the London Borough of Enfield in 1981 where his role included the implementation of the 1981 Education Act.  His interest in supporting children with additional needs led him to train as an Educational Psychologist (EP) at London University in 1985.  He worked as an EP for 13 years which culminated in him becoming Head of Family Services in Oxfordshire and Principal EP.

After a successful period as an EP Chris moved to a unitary authority in Berkshire as Assistant Director: Children with Special Needs and where he later became Director of Education in 2001.

In 2004 Chris was appointed to a newly created role as Director of Children’s Services in the London Borough of Hillingdon where he remained for 7 years.  In 2011 he assumed a role as independent adviser to the Home Office on matters relating to safeguarding and migrant children and their families and created the role of Independent Chair of the Family Returns Panel – a role now enshrined in statute.

In 2014 Chris returned to the role of DCS in the London Borough of Harrow where he remained for 4 years before moving to his current role as DCS in Gloucestershire.  He has developed a reputation for turning around failing local authority children’s services and has been appointed Independent Chair of two Improvement Boards by the DfE. Chris is now among the longest serving Directors of Children’s Services in the country.

Throughout his career Chris has remained passionate about vulnerable children and those who require additional support to realise their potential.