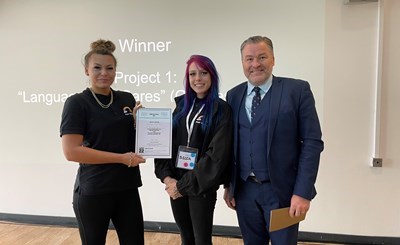 As part of the celebration for Care Leaver’s Week, the National Leaving Care Benchmarking Forum (NLCBF) and Young people’s benchmarking forum (YPBMF) wanted to shine a spotlight on innovative projects that have been co-created by care experienced young people and allied professionals, which are aimed at making a difference and promoting the needs and best interests of care experienced children and young people, both locally and nationally.

Gloucestershire’s Ambassadors attended the Celebration Event on 28 October to showcase the Language that Cares campaign in a short film to an audience which included local authorities from across the country. We were delighted it was then chosen as the overall winner by a panel of care experienced young people.

The award was announced by the National Implementation Adviser for care leavers, Mark Riddell MBE from the Department of Education. Mark is pictured with Ambassadors Eliza and Becca who represented GCC at the event. Upon receiving the accolade, Eliza and Becca thanked all the other young people who have worked on this project.

As events were running simultaneously in Leeds and Bristol, it wasn’t possible to receive the actual award on the night, but it was sent on afterwards.

Gloucestershire’s Ambassadors are extremely passionate about the Language that Cares Campaign and have worked hard to produce a brilliant suite of resources to embed key messages about the importance of language that is used to speak with and about care experienced children and young people. Resources include creative and thought provoking videos, posters, leaflets and pens and the campaign is one of the biggest projects to ever hit the Ambassador’s schedules!

It’s all about changing the words, and challenging the underlying values and attitudes, used to talk about and with children and young people in care. Even though we have been in lockdown and promoting our resources virtually, the Language that Cares Campaign is in full force and being actively promoted. The resources and promotion activities are very well received and further developments are underway to spread the word and maximise the impact.

As Henry, one of the Gloucestershire’s Ambassadors says: “We believe that the Language that Cares message shouldn’t stop with Gloucestershire County Council as the Ambassador’s aim is to get the message promoted far and wide as this is something that will make a difference with all children and young people in care. We will be creating even more posters, videos and coming up with even more heartfelt messages to push forward and change negative words and phrases that are used.”

Many congratulations to our wonderful Ambassadors on this well deserved award!

About the National Leaving Care Benchmarking Forum (NLCBF)
Facilitated by Catch22, the National Leaving Care Benchmarking Forum is a network promoting the development of quality leaving care services in member local authorities and partner organisations through a process of benchmarking and shared learning. Our ultimate aim is to achieve the best outcomes for young people making the transition from care to adulthood.
The NLCBF currently has a large and active membership of 112 local authorities, organisations and trusts from England and Northern Ireland.

About the Young People’s Bench Marking Forum (YPBMF)
The Young People’s Bench Marking Forum (YPBMF) consists of young people aged 16 and above from local authorities in the NLCBF. The main aim of the YPBMF is to help improve services and provide more learning and participation opportunities for young people, working alongside the NLCBF to complete a jointly-created work plan. For more information, contact ypbmf@catch-22.org.uk or the Catch22 Co-production & Engagement Lead Nat O’Brien