Gloucestershire County Council has asked government for over £10million in an ambitious bid to transform active and green travel in Gloucestershire. 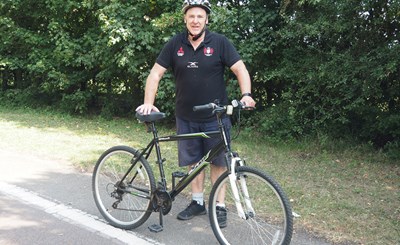 Earlier this year government announced a strategy to make space for cyclists and pedestrians and support increasing capacity on public transport as a result of the Coronavirus pandemic and social distancing.

The county council has provisionally been allocated £1.15million in the second tranche of the Emergency Active Travel Fund, however to fully recognise the importance of cycling and make a lasting change in the county, Gloucestershire has submitted an ambitious bid for £10million to transform cycling opportunities.

Gloucestershire’s bid prioritises funding for six mile-long Cheltenham to Gloucester B4063 cycle link, which is the key to unlocking green transport for those commuting between the two urban areas. This cycle way is included in existing plans and will connect Gloucester city, Tewkesbury district and Cheltenham borough.

The bid also includes a number of smaller schemes which draw on local knowledge submitted by district council colleagues in Tewkesbury, Stroud, Cotswolds and the Forest of Dean, as well as the Gloucestershire Local Cycling and Walking Plan and Gloucestershire’s Local Transport Plan. The county council has picked the schemes which will benefit cyclists and pedestrians most, supporting the re-opening of schools and local businesses to aid Gloucestershire’s Covid-19 Recovery and that best meet the criteria set out by the Department for Transport (DfT), including delivery timelines.

Cllr Nigel Moor, cabinet member for planning and environment, said, “We want to address the quality of cycle facilities in Gloucestershire and this bid demonstrates what we can do with the right levels of investment. We know people are eager for cycling improvements because they’re telling us; we are listening and taking action.

“The B4063 remains a priority; it has long been considered a barrier to economic and environmental growth that there is no direct cycle way between Gloucester and Cheltenham. However, we recognise that all areas of the county need positive changes to cut congestion and pollution, to improve the health and wellbeing of residents and boost the local economy.

“The proposals included in our bid best meet the DfT’s criteria for funding, and we believe they will give Gloucestershire the greatest chance of success. We have deliberately been as ambitious as possible with this bid and make no apologies for trying to get as much funding as possible, but we may not get everything we’ve asked for.”

At its peak, cycling in Gloucestershire increased by 190 per cent during the coronavirus lockdown. Investment in Gloucestershire’s cycle network is therefore needed to capitalise on and lock in these changes in travel behaviours and the resulting benefits.

Gloucestershire’s travel habits are typical for a largely rural county; over 50 per cent of people commuting by car, however up to 60 per cent of commuters (depending on the district) have less than 5km journey to work[1]. Using the Propensity to Cycle (PtC) tool supplied by the Department for Transport, the council can see that there is potential to increase cycling threefold through the area of the proposed B4063 scheme.

Find out more online at www.gloucestershire.gov.uk/eatf-bid

Image is of Cllr Vernon Smith, cabinet member for highways and flooding in Gloucestershire, who is supporting this bid. Watch a short video from Cllr Smith on our youtube channel.