Gloucestershire Fire and Rescue Service were in attendance at an incident near Drybrook on Saturday, 6 August. 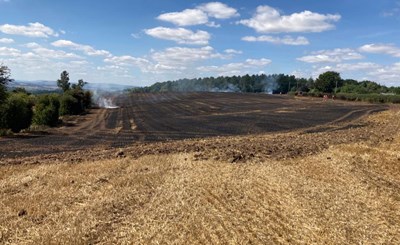 The fire service was called at 12.38pm on Saturday, 6 August, to a fire in a field of cut straw and hay near Drybrook.

The fire covered 15 acres and also affected a tractor and a hay baler.

Five fire engines, two from Coleford, one from Cinderford, one from Ross-on-Wye and one from Whitchurch, used hose reels and breathing apparatus to extinguish the fire.

The stop signal was received at 2.38pm.