Gloucestershire continues to stand with Ukraine

Councils across Gloucestershire will mark Ukraine Independence Day on 24 August having welcomed over 1000 Ukrainian guests to the county since March as part of the Homes for Ukraine scheme. 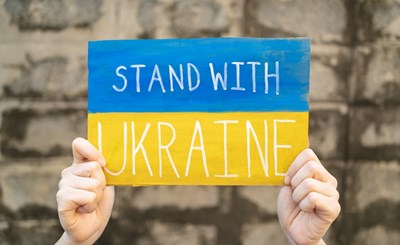 On 24 August the people of Ukraine mark their Independence Day, which will be exactly six months since Russia’s invasion, and 31 years since declaring independence from the Soviet Union in 1991.

In Gloucestershire, residents can show support for Ukrainians in several ways including:

All seven councils in Gloucestershire will fly the Ukrainian flag at their offices to honour the day and join in the social media campaigns.

Cllr Mark Hawthorne, leader of Gloucestershire County Council, said, “Gloucestershire continues to stand with Ukraine, and we will mark Ukraine Independence Day to show solidarity. Our thoughts are with all those who have lost loved ones because of the conflict and the millions of other people who have had their lives turn upside down through no fault of their own. I hope everyone around the county will join in and stand with Ukraine.

“I’m humbled by the generosity of Gloucestershire’s residents; many are going above and beyond to help their guests settle into living in our county. Our partnership with Gloucestershire Action for Refugees and Asylum Seekers (GARAS) has been fundamental to understanding what the Ukrainian community is experiencing and how we can help people to become independent and settled in our county longer term.”

What is Gloucestershire doing to support the Homes for Ukraine scheme?

Since the conflict began, hundreds of residents have opened their homes to over 1000 Ukrainian guests fleeing war, and all seven Gloucestershire councils have come together to make sure accommodation is safe and suitable. Alongside partners, the county council has supported over 200 children so far with finding a school place so their education can continue.

English courses run by Adult Education are extremely popular, and some colleges in Gloucestershire have put on new courses designed to support Ukraine young people. Mental health support is being provided, and the Department for Work and Pensions through their Job Centres are holding sessions for Ukrainians to help them find employment when they are ready.

As part of the support for all migrants, for example those from Syria, Hong Kong and Afghanistan as well as Ukraine, Gloucestershire Action for Refugees and Asylum Seekers have been commissioned to provide on the ground support services. This includes interpreters and helping with individual complex cases to settle in the county.

Adele Owen, director of Gloucestershire Action for Refugees and Asylum Seekers (GARAS), said, “My team have been working hard to make sure everyone who comes through our doors is supported, no matter where they are from. We see first hand the impact war can have, and although many Ukrainians want to get straight into work, all clients we see have experienced significant trauma as well as needing practical support like housing. So, we extend our sincere gratitude to hosts and the public sector who are supporting people during this humanitarian crisis.”

Gloucestershire’s Homes for Ukraine team will shortly start a pilot of support sessions for sponsors in recognition of the emotional stain supporting a refugee can have. If the pilot is successful, more sessions will take place in future.

There is still a need for sponsors in Gloucestershire, so if you are interested in supporting a Ukrainian guest the Homes for Ukraine team can talk you through what is involved. You can also take a look through our Sponsor information pack online.