Hamish Thompson, a Gloucestershire firefighter of 43 years standing, has been awarded the British Empire Medal in the Queen’s New Year Honours. 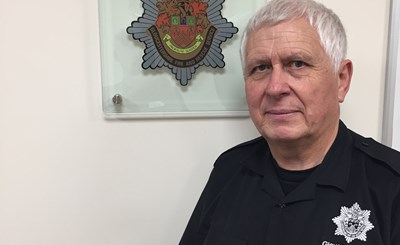 The award, for services to the fire and rescue service and the community, is included in the New Year Honours List published today (Saturday, 29 December).

Hamish, who is 62 and originally from County Durham, moved to Gloucestershire in 1974. He joined Gloucestershire Fire Brigade in December 1975 and spent the first 30 years of his career at Cheltenham Fire Station.

Hamish retires on 31 December 2018 from his current role as Technical Services Support Officer where he provides technical support for all equipment, making sure it is of the highest standard, to improve fire fighter safety.

Hamish said: “I see being awarded the British Empire Medal as the ‘icing on the cake’ in a career which I have fully enjoyed and where I have met, and been honoured to work with, some exceptional people.”

Andy Hermiston, acting chief fire officer at Gloucestershire Fire & Rescue Service, said: “I would like to thank Hamish for his dedication to the fire and rescue service during his 43 years service. On behalf of all of our colleagues I congratulate him on receiving this well deserved New Year’s Honour and wish him all the very best for his retirement.”

Cllr Dave Norman MBE, cabinet member responsible for public protection at Gloucestershire County Council said: “This is a thoroughly deserved accolade for Hamish, who has given 43 years of dedicated service to the county’s fire service, helping to keep the public and our firefighters safe.”

Hamish is a keen supporter of the Firefighters Charity.