Do you know what’s in your take away?

As the party season approaches, Trading Standards has issued a warning that allergens may be found where you don’t expect them. 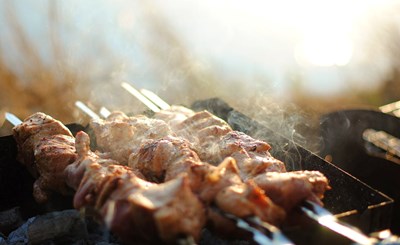 Gloucestershire County Council’s Trading Standards team has carried out a survey to raise awareness of allergens in food, in particular one you might not be expecting – milk in kebabs. Yoghurt is often used in the marinade for chicken pieces to tenderise the meat, whilst milk proteins can often be found in preformed kebab meat.

Undercover officers contacted a number of kebab shops in Cheltenham and Gloucester and declared a milk allergy when they ordered a kebab.

Reassuringly, most of the sellers did not sell to the undercover officer as they were able to confirm there was milk present or recognised that they could not be certain that there wasn’t milk in the meat.

Officers were sold kebabs at three shops where they suspect there may be milk present in the food. The kebabs have been sent for analysis and investigations into the shops will be carried out if this proves to be the case.

Cllr Dave Norman, cabinet member for Trading Standards, said: “In the UK, an estimated ten people die every year from food-induced anaphylaxis so it is absolutely vital that food sellers are able to confirm what allergens could be present in their food. If you are at all unsure as to whether a seller can do this, move on to somewhere else and be safe this Christmas.”

The survey also revealed a disappointing lack of allergen information on menus and websites; although not a legal requirement, Trading Standards recommends this as best practice. The law on allergens is clear – if food is not packaged, the person selling it to you MUST be able to recognise and identify allergens when asked.