Our time-lapse video clearly shows the extent and complexity of the work needed to fix this key route in the south of the county. 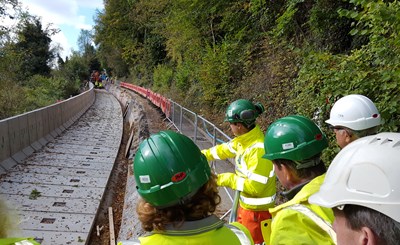 The site is located on the B4058 at Horsley Hill, a few hundred metres to the north of the village of Horsley.

Gloucestershire County Council invested the £550,000 required to get the landslip fixed and the road re-opened.

Because of the extent of the work, the remaining road at the site was completely removed to provide access to the rock below.

The existing highway surface was excavated down to about 2m before 94 pre-cast concrete ‘L’ sections were secured to the underlying rock.

The reinstatement of the slip area below the highway involved the installation of soil stabilisation matting, together with imported topsoil on the slope, with an erosion control blanket covering the slip area.

Work started at the end of July 2017and the road was re-opened to two-way traffic in December 2017.