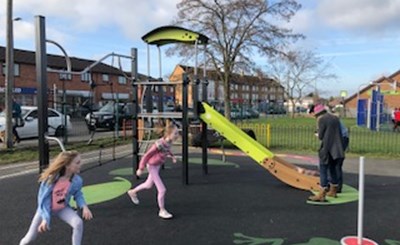 This investment provides a safe and exciting play area with new and improved facilities available to children with disabilities. The improvements have been funded through a county council grant and funds raised by Leckhampton with Warden Hill Parish Council.

Salisbury Avenue play area is an all-weather play facility that is designed for both early years and young children from ages 2 to 11. Phase 1 of the project was completed in February 2017 and involved replacing two old pieces of play equipment and cost £10,528; of which Cllr Iain Dobie contributed £5,000 as part of the children’s activity fund.

Phase 2 has now been completed and involved replacing all remaining equipment and cost £53,000, of which Cllr Iain Dobie contributed £15,000 as part of the county council’s growing our communities fund. The playground has already benefitted from a new games area in 2015 which incorporates a basketball court. The games area was co-funded by the county council, the local parish council and Cheltenham Borough Council.

“With the help of funding from all three councils, local children of all ages can now enjoy themselves on modern, safe and fun equipment. I played here myself when I grew up in Warden Hill and now, fifty years later it is wonderful to see our Salisbury Avenue Playground so well equipped and so well used.”

Cllr Adrian Mears, chairman of Leckhampton with Warden Hill Parish Council, said: “This new play area at Salisbury Avenue, together with the new Multi Use Games Area (MUGA) and other improvements, has been a very big investment by the Parish Council over the past four years. It has been our biggest project since the building of the Brizen Young People’s Centre ten years ago.

“The total cost is over £120,000 and we are extremely grateful to the county council’s communities fund for contributing £30,000 and to Cheltenham Borough Council for contributing £18,500. It is very good that in these hard times we have together been able to provide new facilities and services for young people, both in Warden Hill and in Leckhampton.

“The Parish Council would also like to pay tribute to Peter Lynch who was a member of the council for the past ten years until his untimely death last December. Peter lived in Salisbury Avenue and was the member most responsible for the Salisbury Avenue play area. He campaigned for making this very large investment and he also played a major role in the Brizen Young People’s Centre.”

Cllr Nigel Moor, cabinet member for planning and infrastructure at Gloucestershire County Council, said: “I am delighted that the community of Warden Hill is being provided with new play facilities and importantly the state-of-the-art equipment is accessible so that it can be enjoyed by all children.” 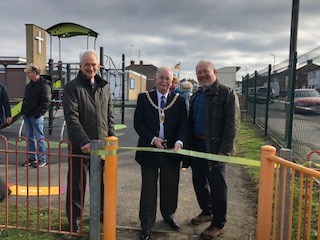 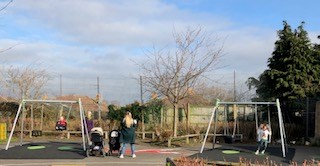