Gloucestershire County Council recognised for their work in LGBT+ inclusion

On 5 February, Gloucestershire County Council along with other organisations and individuals from the South West region were celebrated at an event by Stonewall, a charity for lesbian, gay, bi and trans equality. 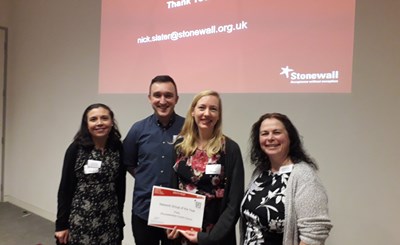 At the event in Bristol, the council’s internal LGBT+ staff network, Prism, received ‘Network Group of the Year’ for their work in promoting LGBT+ equality throughout Gloucestershire County Council and Gloucester City Council.

The event comes after they announced their Workplace Equality Index which lists the top LGBT+ inclusive employers for 2020.

The Workplace Equality Index ranks employers from across public, private and third sectors on how LGBT+ inclusive their workplaces are. This year Gloucestershire County Council ranked 137 out of 503 organisations.

Cllr Mark Hawthorne, Leader of Gloucestershire County Council, said: “Making sure our services are inclusive of all LGBT+ people is an important priority for the council. We are proud to be recognised by Stonewall for promoting equality and providing an LGBT+ inclusive environment for our employees. I would like to thank Prism, our LGBT+ employee network for their hard work and dedication and congratulate them on winning this award.”

Maria Arthurs-Hartnett, the current Chair of Prism network, said: “Everyone on the Prism committee, past and present, has worked so hard to make Prism as inclusive as possible and I am very proud to work alongside such dedicated people.”

Sanjay Sood-Smith, Stonewall’s Executive Director of Workplace & Community Programmes, said: “All of the organisations and individuals recognised in last night’s event are playing a huge role in improving the lives of LGBT people, and should be very proud of their work. We still don't live in a world where everyone is able to be themselves in the workplace, as we know more than a third of LGBT staff (35 per cent) hide who they are at work. By taking steps to make their workplaces supportive and welcoming of all lesbian, gay, bi and trans people, these organisations are bringing us closer to a world where everyone is accepted without exception.”