Have your say on new Gloucester to Cheltenham cycleway designs

Gloucestershire County Council has unveiled new designs for an ambitious cycleway between Gloucester and Cheltenham on the B4063 and you are invited to give feedback. 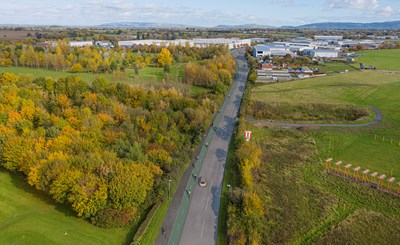 The new cycleway will be accessible to all, in line with the latest Government guidance, and improve health and wellbeing in the community while reducing Gloucestershire’s carbon emissions.

The scheme is key to unlocking green transport for those commuting between the two urban areas and will provide a safe continuous route for the thousands of cyclists in Gloucester, Tewkesbury and Cheltenham. The route will eventually link up Gloucester with the cycling and walking improvements currently under construction in west Cheltenham, giving residents and employees in Churchdown and Staverton direct access to Cheltenham Rail Station.

The scheme will be split into two parts, with work on the section between Elmbridge Court roundabout and Arle Court roundabout starting first in summer 2021. The county council has launched a four-week survey so you can give feedback on new plans for this section and your thoughts will be used to help to shape the final design.

Plans are being developed to extend the scheme further into Gloucester and a consultation is planned later this year to explore options for this section.

Cllr Nigel Moor, cabinet member for planning and environment, said, “We are committed to improving cycling routes in Gloucestershire, and this ambitious scheme will make the most difference to our communities. We want to build infrastructure which helps people to get active and reduce carbon emissions, particularly new cycleways where people feel safe traveling by bike to work, school or for leisure. We want to know what you think so please take the time to have a look at our plans and fill out our survey.”

The B4063 route was originally a Highways England project aimed to address safety concerns raised by cyclists travelling on the busy A40. This route provides a central ‘spine’ cycle network which can then branch out into smaller communities, connecting many workplaces with transport hubs and hospitals as rebooting the daily commute is the long-term goal.

The survey is available online until 10 March 2021 and can be found online at www.gloucestershire.gov.uk/B4063