The project to transform Shire Hall in Gloucester into an energy-efficient and sustainable building has picked up a prestigious national award. 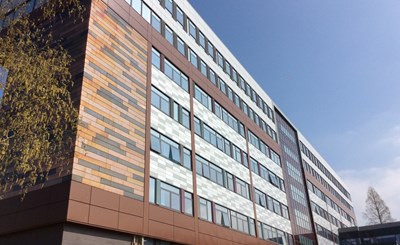 After winning three categories in the regional Constructing Excellence South West awards in December, it went on to compete in the national awards, and the project was announced as the winner of the Integration & Collaborative Working category.

Judges praised the close collaborative working between the county council, contractors Kier and designers Quattro, which enabled staff to continue working in the building during the redevelopment, and the integration of the project team at Shire Hall.

They said this helped to reduce costs and the timescale of the build, caused minimal disruption and transformed the building into a highly sustainable workplace.

It now has solar panels and highly insulated cladding systems, which have significantly reduced its carbon footprint and heating bills and will ensure the building is self-sufficient over the summer months.

It is the latest success for the project, after being named winner of the Best Large Commercial Project in the LABC Building Excellence Awards 2020 for the West of England region in September 2020.

The ambitious redevelopment programme lasted more than 120 weeks and aimed to reduce running costs and make more efficient use of public sector assets.

The redevelopment has allowed colleagues from the NHS, City Council and Police to also work within Shire Hall, creating revenue savings and more efficient use of the building, and the modernised building is much more accessible, with disabled powered access, ramps, lifts and accessible toilets.

Leaders of the county council wanted to rejuvenate the existing building rather than build new offices elsewhere to support the city centre economy and reduce costs, and the redevelopment has acted as a catalyst for the regeneration of the city.

Cllr Lynden Stowe, Gloucestershire County Council cabinet member for finance and change, said: “We invested in extra insulation and solar panels as part of our work to cut our carbon emissions, but it has also given us a building that’s cheaper to run in the long term.

“It’s great that this ambition has been recognised with this national award. We now have a much more energy efficient building that has helped trigger further investment in the area and I would like to congratulate everyone involved in the project for this well deserved success.”

Dave Walsh, head of general works at Kier, said: “The close working relationship between ourselves, the design team and the GCC project management team was undoubtedly the major contributing factor in the success of this complex building project. We are delighted with its outcome and the national recognition it has achieved.”

Mike Court, director of Quattro Design Architects, said: “This is fantastic recognition for Gloucestershire against some incredible projects across the country. Our partnership with the project team, Kier Construction and Gloucestershire County Council, alongside the combined effort of all those involved, has created a wonderful legacy for the county.”