Traffic flow improvements on Llanthony Road steps up a gear! 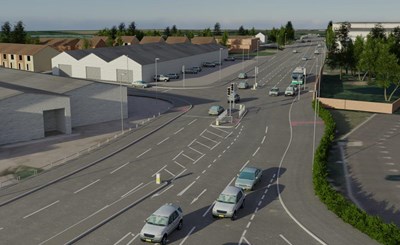 Improvements to part of the Gloucester South West Bypass, also known as the A430 Llanthony Road scheme, aim to widen the carriageway to provide two lanes in each direction at a well-known pinch point, helping to improve the traffic flow on a major route through the city.

The Gloucester South West Bypass is an important link from the city centre to the M5 motorway, and the Llanthony section is the only section still waiting to be improved.

The proposed scheme will also see St Anne Way widened to provide two right turn lanes into Llanthony Road, and new traffic lights at Sudmeadow Road to make traffic flow better. The side road junctions will also be improved and there will also be improvements to pedestrian crossings and facilities for cyclists.

Cllr Nigel Moor, cabinet member for planning and infrastructure, said: “I am delighted site preparation works will begin shortly as this major scheme is vital to help keep Gloucestershire moving and support economic growth in the county. For many years the Llanthony Road section of the Gloucester South West Bypass has created a bottleneck for traffic, frustrating commuters, residents, visitors and businesses alike.

“The widening of the road along with improvements to pedestrian crossings and cycling facilities will provide a range of benefits including reducing congestion and journey times, lowering air and noise pollution; as well as boosting employment by improving links to local businesses.”

Cllr Pam Tracey, local county councillor for Hempsted and Westgate, said: “The widening of Llanthony Road is a very important improvement scheme for the county, so I am pleased site preparation works will begin shortly. Improving the traffic flow on this busy and popular road will provide local residents and commuters with faster journey times along the Gloucester South West Bypass.”

David Owen, CEO of GFirst LEP, said: “These improvements will help to improve the traffic flow on a major route from the city centre to the M5 motorway. GFirst LEP was pleased to invest £2 million via Growth Deal funding into this South West Bypass Improvements scheme. Our investment went towards funding for the business case for the overall project.”