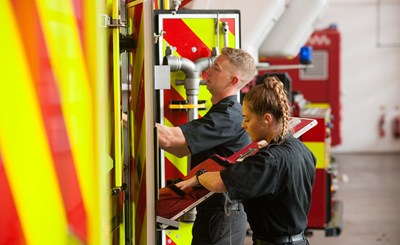 Inspectors found improvements had been made in relation to the service’s fire protection work, specifically in improving the way they work and increasing the size of the team. The improvements made mean that ‘protection’ has been removed as an area of concern.

But they also identified two ‘areas of concern’ that they require the service to begin addressing immediately.

The HMICFRS recognised that GFRS had introduced a new set of values and had engaged with staff on the importance of them, however, they have asked that more work is done to embed the values and their associated behaviours.

They also recognised that the service is using the values to underpin recruitment and promotion and that the service has recently employed a dedicated Equality, Diversity and Inclusion (ED&I) officer, but that they need to improve progress to promote ED&I further.

HMICFRS has asked GFRS to submit an action plan by the end of the month, setting out how it intends to deliver the necessary improvements in these areas. Inspectors will then review the plan; make any suggestions they think are necessary before ultimately signing it off. Once HMICFRS has approved the plan, GFRS will publish it in full.

The county council has invested more than £2m in revenue funding over the past two years and a further £2m of additional funding was agreed at full council last week which takes the figure to £4m. In addition it is also supporting a capital programme of over £8m to provide new operational vehicles and equipment.

Cllr Dave Norman, cabinet member for GFRS, said: “Whilst everyone has been working towards making the required improvements, we have to accept that things haven’t moved quickly enough. It is obviously disappointing but there is no shortage of ambition, drive and commitment to make sure we get where we need and want to be. It’s important that residents understand that this is not about their safety, when they need us in an emergency we will be there to help – nothing has changed there.”

Cllr Norman continued: “A lot of these issues are rooted in a historic culture that has proven more difficult to improve and evolve than we’d hoped. We know our dedicated firefighters continue to deliver services for communities that we can all rightly be proud of. We know improvement takes time and investment and we have agreed a further £2m of additional funding for the service, so we aren’t simply putting more pressure on current hardworking members of staff.”

Mark Preece, Interim Chief Fire Officer at GFRS, said: “I acknowledge that sufficient progress and change has not been made and we fully accept these concerns. We are committed to bringing about the necessary improvements, which is being supported through additional funding from the county council.”

He continued: “I’m very proud of how hard staff have worked throughout the pandemic but we must all now take responsibility and work together, to ensure change takes place more quickly and our aspirations for the service become a reality.”

The action plan will be submitted to HMICFRS on 28 February and will be published no later than the end of March.

HMICFRS inspectors will return to inspect the service on these specific areas of concern in the autumn.