Thousands of students from Gloucestershire will attend a hard-hitting roadshow, which aims to reduce the number of traffic collisions involving young people in the county. 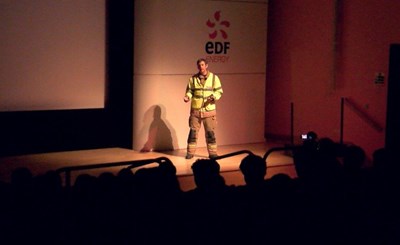 What if? is an interactive theatre and film event, telling the tale of two young men who were involved in a crash in the Forest of Dean in 2015. The pair take the audience on a journey through their experiences, exploring their emotions and the impact the crash has had on their lives.

The story will be accompanied by on-stage talks from the emergency services, road crash survivors, family members who have lost loved ones and paramedic lecturers from the University of Gloucestershire.

The What if? roadshow will be viewed by more than 5,500 students aged 16 to 24 in Gloucestershire throughout February, March and May. It is jointly funded by Gloucestershire Fire and Rescue Service (GFRS) and the Office of the Police and Crime Commissioner (OPCC) and has been running since September 2016.

The first show will be on Monday 3 February at Cirencester College and other venues will include EDF Energy in Barnwood, Gloucester, Cheltenham Ladies’ College, Parabola Arts Centre in Cheltenham and Hartpury College in Gloucester.

Cllr Dave Norman, Gloucestershire County Council cabinet member with responsibility for the fire and rescue service, said: “This roadshow aims to make young people fully aware of the impact a road traffic collision can have. It is a powerful way of raising awareness of the risks they face on the roads and how they can keep themselves and others safe. We hope that alerting them to these dangers will have a positive effect on the way they drive in the future.”

Martin Surl, Gloucestershire’s Police and Crime Commissioner, said: “It is very brave of the boys to put themselves through this process to help others and I am very grateful. This kind of emotive education has already proven to be effective since we started What If? back in 2016 and our research suggests in-car distractions and low awareness of risk contribute to road traffic collisions (RTCs) where young people are behind the wheel. This is why the roadshow will focus on such important issues.”

As well as funding from GFRS and the OPCC, the What if? project is supported by Gloucestershire Constabulary, South Western Ambulance Service NHS Foundation Trust (SWASFT), University of Gloucestershire, Severn Major Trauma and Great Western Air Ambulance Charity.