A Gloucester man has been sentenced for selling counterfeit cigarettes and tobacco worth more than £13,000. 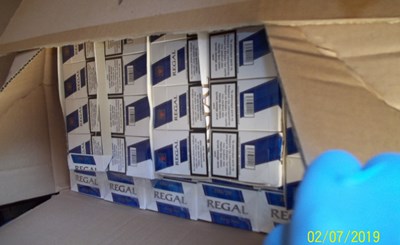 He was given a 10-month prison sentence, suspended for two years, at Gloucester Crown Court today in a case brought by Gloucestershire County Council’s Trading Standards Service. He was also ordered to complete 180 hours of unpaid work within 12 months.

An investigation was launched after Trading Standards received a tip off that Townsley was involved in the sale of illegal cigarettes and tobacco.

Officers from Trading Standards, HM Revenue and Customs and Gloucestershire Police executed warrants on premises at Highview, Cecil Road and Granville Street in the city on 7 February 2019.

At Townsley’s home address officers found more than 45 packets of counterfeit cigarettes, more than 65 pouches of 50g hand rolling tobacco and mislabelled tobacco products. Counterfeit brands included Richmond cigarettes and Golden Virginia tobacco and Trading Standards estimate that the seizure was worth just over £980, had they been sold on the street.

At the address in Cecil Road, officers seized 133 packets of counterfeit Richmond and Regal cigarettes that were illegally labelled and two pouches of illegal hand rolling tobacco, estimated to be worth just over £460.

Officers seized 2,804 packets of cigarettes and 190 pouches of hand rolling tobacco from a van in Granville Street, estimated to be worth just over £12,000 had they been sold on the street. The evasion in duty on all of the cigarettes and tobacco was worth £20,555.33.

Further action will now be taken by Trading Standards officers under the Proceeds of Crime Act to recover funds gained by Townsley through the sale of illegal cigarettes and tobacco.

Cllr Dave Norman, cabinet member for Trading Standards, said: “I would like to thank the council’s Trading Standards team and our partner agencies on another successful operation. Mislabelled and fake branded cigarettes and tobacco is a blight on our communities and it undermines the Government’s plans to reduce the harm that smoking causes. It is undeclared and tax is not paid, so it takes money away from our vital public services.

“I would like to thank members of the community for their help in this case and would urge anyone who has information about the illegal tobacco trade to contact our Trading Standards team via the Consumer Advice Service on 03454 04 05 06 or email tradingstandards@gloucestershire.gov.uk.”