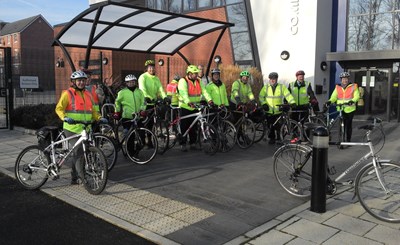 The request presented by Cllr Dobie was to congratulate the police on Operation Close Pass, and inviting them to work with the county council on a joint cycling safety campaign.

The cycling safety operation was a national initiative from the police last year, and aimed to educate more drivers about how to drive safely around cyclists. The council offers Bikeability training to around 4500 school children each year, however more could be done for cyclists of all ages. Cross-party support called for a joint safety campaign, hoping that better awareness of safety issues for cyclists will encourage more people to get on a bike rather than take a car.

Cllr Iain Dobie, (Cheltenham: Leckhampton and Warden Hill, Liberal Democrat), Deputy Leader of the Liberal Democrat Group at Gloucestershire County Council, said, “I am pleased that Gloucestershire Constabulary have looked into the issue of cycling safety, running a trial of Operation Close Pass in July of last year.  However there is much more to be done and I look forward to progressing a joint campaign between Gloucestershire County Council and the Chief Constable.  By tackling cycling safety I believe we can influence more people to swap their car for a bike.

Cllr Lesley Williams MBE, (Stroud: Stonehouse, Labour) leader of the Labour and Green Co-operative Alliance at Gloucestershire County Council, said, “Cycling is not only good for fitness it’s good for the environment too, and I would encourage everyone to give it a go. Based on my personal experiences, there needs to be more mutual respect between drivers and other road users, and I would gladly see a campaign to raise awareness of safety.”

Cllr Nigel Moor, (Cotswold: Stow-on-the-Wold, Conservative) cabinet member for road safety, said, “We want all road users to feel safe on the roads whether on foot, horse, motorcycle, car or a bike. We hope by joining forces with the police we can improve the visibility of the safety issues, and promote the need to share the roads and drive responsibly.”

“This Council notes the outstanding cycling routes which Gloucestershire enjoys, both within its towns and city and the rural countryside. This Council further notes the benefits of cycling, in terms of individual health and air quality as well as bringing tourists into the area.

However, this Council also recognises that cycling in Gloucestershire can be dangerous, with cars often passing too close to cyclists, increasing the chances of a collision. This undermines the good work taking place across parts of the county to encourage cycling and dissuades many people from opting to use a bicycle rather than a car.

This Council recognises the work already carried out by Gloucestershire Constabulary with Operation Close Pass last July, which was aimed at informing car drivers about safe distances for overtaking cyclists and by GCC with the Bikeability training which is delivered to 4,500 pupils each year, focusing on reducing the risk of young people cycling on roads. There is already a clear drive towards promoting cycle safety across the county.

We therefore ask the Leader of Council to write to the Chief Constable of Gloucestershire Constabulary, to congratulate the police on the work done to date and invite them to collaborate with GCC on a joint campaign focusing on safety issues for cyclists of all ages. The GCC Road Safety Group would be tasked to prepare this campaign and to collaborate with the Chief Constable on the promotion and delivery.”