The county council’s antibiotic resistance campaign has been recognised with an international public engagement award. 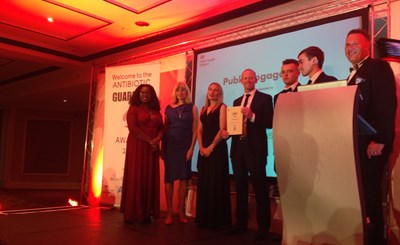 The campaign, to raise awareness of antibiotic resistance was awarded ‘Highly Commended’ at the fourth Antibiotic Guardian awards in Birmingham on 27 June 2019.

The awards celebrate the work of professionals across the UK and abroad in tackling antimicrobial resistance, led by Public Health England. It aims to increase commitment and raise awareness among the public and health professionals about how we can slow the development of resistant bacteria and cut overuse and unnecessary use of antibiotics. Without effective antibiotics many routine treatments will become increasingly dangerous.

The judges recognised the unique approach taken by the council in which sixteen to twenty four year olds, the age group amongst the highest misusers of antibiotics, were asked to design the campaign.

The winning team from Gloucestershire College saw their concept become reality across a county wide public awareness campaign, highlighting that if things don’t change now, by 2050, 90,000 people in the UK will have died from antibiotic resistance. The campaign reached over 640,000 people on social media and featured on buses and billboards across the county.

“Antibiotic resistance is a really important issue which affects all of us and so it’s vital that we raise awareness about the simple steps people can take to protect themselves. We were very pleased with the designs produced by the students from Gloucestershire College, which helped us to create modern, engaging campaign materials and it’s brilliant that these efforts have been recognised by the judges.”