Coleford and Lydney libraries are supporting students enrolled in the National Citizen Service (NCS), by offering them a space to create, develop and deliver their ideas. 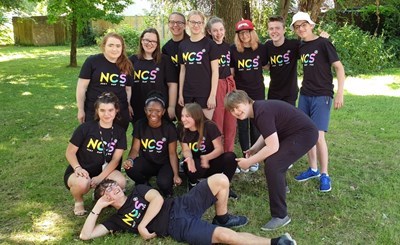 NCS is a life changing programme open to all teenagers aged 15 to 17 which aims to help them build skills for work and life, in the form of projects that give something back to the community.

Lydney Library’s community garden is being given a makeover to make it more attractive and inviting, to encourage wildlife and to brighten the space with the addition of a colourful mural.

The NCS team arranged a series of fundraising events to gain the £200 needed for the makeover. They completed a 100 miles sponsored relay with each team member running 16 laps around Lydney lake, held a barbecue at the Cross Keys Inn in Lydney, did bag packing at Tesco and held a fun day. Fifteen students have been involved, spending two weeks based at the library to work on the project.

The NCS team based at Coleford Library have been fundraising to support the Coleford Foodbank and to support families who may be in need of a little extra help through the summer holidays.

Thirteen students have been based there for two weeks and have been holding sponsored walks around Coleford and Cinderford, a pub quiz at the Miners Arms, a cake sale and bag packing at the Co-op and have raised a fantastic £750 for the Coleford Food Bank.

Vicky Logan, Team Leader for Lydney & Coleford Library, said: “It is brilliant to be involved in this project and it is heart warming to see young people in such a positive light, working so hard to give back to their community.”