Council flag to fly at half mast to commemorate Bosnian genocide

Gloucestershire County Council’s flag is flying at half mast today to commemorate the 25th anniversary of the Srebrenica genocide. 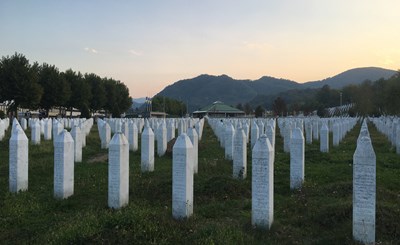 More than 8,000 Muslim men and boys were massacred by Bosnian Serb forces in the town of Srebrenica during the Bosnian War in July 1995.

Remembering Srebrenica, a UK charitable organisation, aims to raise awareness of the genocide and educate children about what the UN called the worst atrocity on European soil since the Second World War.

Its theme for this year’s commemoration is Every Action Matters, which seeks to encourage everyone to reflect upon their own behaviour and choices they make, and demonstrate that however insignificant it may seem, every action matters, whether positive or negative.

Cllr Ray Theodoulou, chairman of Gloucestershire County Council, said: “We must make sure that we never forget about this awful atrocity and reaffirm our commitment to standing up against all forms of hatred and prejudice that targets groups based on their religion, ethnicity, gender, sexuality or any type of difference.

“It’s more important than ever for us to come together as people in the UK, no matter what our background, to celebrate diversity and show solidarity against hatred and discrimination. By flying the county council’s flag at half mast we stand together to commemorate this anniversary and remember the lives that were lost 25 years ago.”