International Women in Engineering Day (INWED) is on 23rd June, and to celebrate Gloucestershire County Council will be sharing some inspirational quotes from ladies in their highways teams. 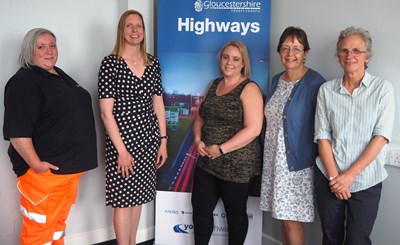 INWED is an annual international awareness campaign, developed and coordinated by the Women’s Engineering Society (WES) to celebrate the achievements of women in engineering and inspire younger generations. Female engineers from the county council’s teams and partners have shared what inspired them to be part of a stereotypically male career industry. In 2018 around 12 per cent of all engineers are women in the UK, but this figure is higher than previous years.

This year marks 100 years of the Women’s Engineering Society (WES). However, the UK has the lowest percentage of female engineering professionals in Europe, while Latvia, Bulgaria and Cyprus lead with nearly 30 per cent.*

Liz Kirkham is Gloucestershire’s operations manager for highways, who first qualified as a engineer in 1985. She is Chair of the United Kingdom Bridges Board, and has spoken on the management of Gloucestershire’s Bridges at several conferences across the globe. In terms of being involved in engineering projects, her biggest achievements include the replacement of the Westgate Bridges, and the strengthening of Mythe Bridge in Tewkesbury.

Liz said, “I qualified over 30 years ago, so I’ve seen this industry change in lots of ways. However, I’ve very rarely felt discriminated against or disadvantaged because of my gender, in some ways it has helped me to “stand out” from the crowd.”

Liz was first inspired to become an engineer by her physics teacher at school, who suggested she went on a “Women in Science and Engineering” residential course. When asked what advice she had for those thinking about a career in engineering, she said, “Go for it! There are so many different challenges, and opportunities within engineering, and you really get the feeling that you are solving problems and making lives better.”

Gloucestershire County Council and their partners also cater for those starting out in their highways careers, with graduate and apprenticeship opportunities based around the county.

Kirsty Boddy might have only worked in engineering for three years, however in that time she has progressed from a highways customer service call handler to a City and Guilds qualified safety inspector for Ringway. Kirsty said, “I really wanted to do more hands on work and be “out in the field” rather than behind a desk. I try to take every opportunity to learn new things, so as part of my job I get to drive the Gritters in winter too.”

Hannah Keeble is an engineering graduate with a Masters in Civil Engineering, working towards professional chartership. Hannah works for Atkins as an assistant engineer, and she is based in Gloucester and Bristol. Inspired by her father and her GCSE work experience placements, Hannah has embraced her passion for problem solving; “There are new challenges arising each day in work that I have to find a solution for and that is the fun of it. From complex mathematical equations in the assessment of bridges to how to best present a report to our client, I really enjoy it.”

Follow @GlosRoads on Twitter for more case studies and quotes from women in engineering. The campaign hashtag is #INWED19 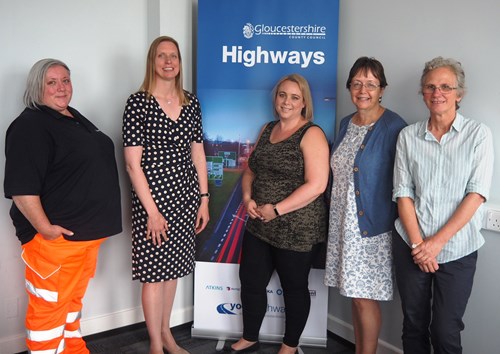 More information about International Women in Engineering Day (INWED) can be found at https://www.wes.org.uk/

*INWED statistics can be found here