The start of a new positive relationship has been heralded by Gloucestershire Fire and Rescue Service (GFRS) and the Office of the Police and Crime Commissioner (OPCC). 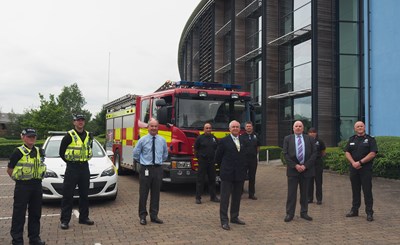 Chris Nelson, Gloucestershire’s new Police and Crime Commissioner, and Cllr Dave Norman, Gloucestershire County Council’s cabinet member with responsibility for the Fire and Rescue Service and road safety, held their first official meeting at Waterwells, where the fire and police headquarters are based.

Mr Nelson was elected to the post in May, while Cllr Norman was re-appointed to his cabinet member position following the local elections.

They are both looking forward to using their roles to promote a closer working relationship between GFRS and the OPCC.

Some of the areas for greater collaboration will include:

Cllr Dave Norman said: “I would like to congratulate Chris on being elected as the county’s Police and Crime Commissioner and I’m really looking forward to working with him. So much of the invaluable work of the fire service and the police is closely linked, so a positive working relationship will be of great benefit to the county as a whole.”

Chris Nelson, Police and Crime Commissioner for Gloucestershire, said: “Whilst there is still a degree of uncertainty around what the Government wants with regard to reforms that have been introduced in other parts of the country, this is a fresh start and a real opportunity to build an even better service for the people of Gloucestershire.

“There are many advantages to be gained from GFRS and the Constabulary working more closely together and enhancing community is our ultimate aim. I am really excited about what we could achieve by working together collaboratively and with mutual respect.”