Stroud Library could be moving from its existing location to a more central and accessible location within the Five Valleys Shopping Centre following a positive public response to the proposal. 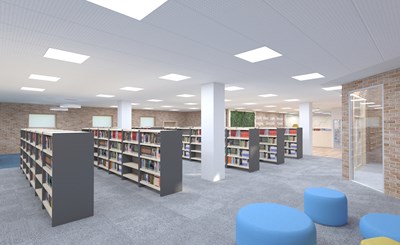 More than 500 people took part in a survey asking for people’s views and 70 per cent of people who responded said they were supportive of the move.

The survey formed part of an eight-week consultation period held earlier this year, which included four public consultation events and a focus group, to gather feedback on the proposals and understand the impact the relocation may have on library users and the wider community.

The survey also revealed that 39.7 per cent of respondents said they would be able to visit the library more often in its new location while 39.4 per cent said their use would be unaffected.

The library is currently situated on the first floor of two connecting buildings in Lansdown, with limited visibility from street level.

The proposal would see it move to a newly refurbished area on the lower ground floor of the shopping centre in King Street, next to a new GP surgery, with a ground level shop front entrance.

Its relocation would provide a more versatile and larger public library space, which is more environmentally friendly and designed to meet the needs of the people who use it. A high street presence could also enable more people to use the many services offered by the library.

Gloucestershire County Council’s cabinet is being asked to agree to the relocation of Stroud Library at a meeting on 22 June.

Cllr Dave Norman, cabinet member for libraries, said: “I would like to thank everyone who took part in the public consultation into the proposed relocation of Stroud Library. The new site would be more accessible in the heart of the town centre and is likely to attract extra visitors, who would be able to benefit from the many services offered by the library.

“The new location would be more environmentally friendly, as parts of the centre are powered using solar energy and electric vehicle charging is available at the site, so I’m pleased this has received a positive response.”

You can read the full cabinet report here.