Gloucestershire County Council has welcomed today’s news (14 March) as Highways England unveil option 30 as their preferred route to fix the A417 ‘Missing Link’. 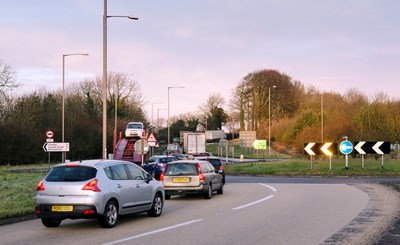 Following extensive consultation in March last year, Highways England has said that they will move forward with route option 30 – the county council’s preferred choice – as they push forward with plans to improve the journey for thousands of road users.

Used by more than 34,000 vehicles a day, the route is a key link between the West Midlands and London. It is known for having long journey delays.

Finding a solution has always been a priority for the county council, with nearly 7,000 people and businesses previously pledging their support for an improvement scheme, which is being delivered by Highways England.

Cllr Mark Hawthorne, Leader of Gloucestershire County Council, said: “We have been pushing for decades to sort out the A417 missing link - and today’s news puts the project much closer to the finishing post.

“Local residents have had to suffer pollution, delays and serious accidents as a result of this road – today’s announcement takes us much closer to sorting that out for good. The county council has already invested £1.5m to support the development of this scheme – and we will keep backing Highways England to get it built.”

You will find more information on the preferred route in Highways England’s booklet, which is available on their website.

The report on the public consultation, a visualisation video and a short film about the scheme are also available online.