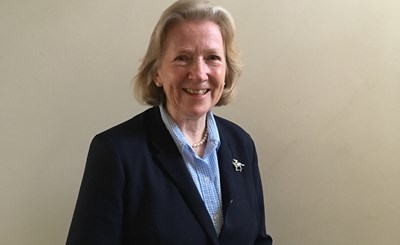 Jane will succeed Robert Bernays OBE, who retires in April after serving for 8 years in that role. Jane has lived in Gloucestershire since 1972 and has served the county in a variety of roles, promoting a sustainable rural economy and the role of the church in the county. She was Chairman of the South West Regional Committee of the Country Land and Business Association from 2012-2015, having been a committee member since 1991. She is an Honorary Lay Canon of Gloucester Cathedral and a member of the Grants Committee of the Gloucestershire Historic Churches Trust. She is also a member of Hill PCC and Wotton Deanery Synod. Jane was High Sheriff of Gloucestershire in 2001-2002 and President of the Gloucestershire Society in 2012. Jane's interests include the arts, travel and riding.

Jane, who lives in Berkeley and has been a Deputy Lieutenant since 2005, said “It's a great honour to receive this appointment and I look forward to continue supporting the Lieutenancy in our wonderful county.”

Edward Gillespie welcomed Jane into this role. “Robert has been part of the Lieutenancy for over 30 years and we are enormously grateful for his massive contribution to the county. I am most grateful to Jane for stepping up into this important role for the next three years and look forward to working with her and our outstanding team of over 30 Deputies.”

Robert Bernays said, “The Lieutenancy has an important role in bringing together the whole of Gloucestershire and celebrating its great people and their work. I have enjoyed playing a part and I am sure Jane will as well.”