Talented young poets in Gloucestershire have been given prizes to reward the high standard of their work in a competition. 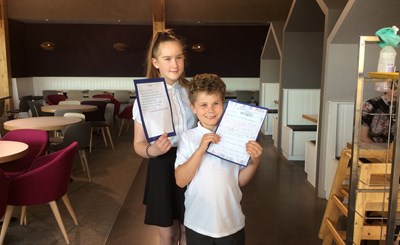 The contest, launched at Tuffley and Matson libraries in February, asked school children around the Robinswood Hill area to submit their poems. The theme of the poetry was what children thought would happen in 2019 and judging was carried out by a member of the Gloucestershire Poetry Society.

The winners and runners-up, who are all from Moat Primary School in Matson, were:

A £10 book token was awarded to the winner in each category with £5 tokens for the runners-up. A £100 prize has also been donated by community development charity The Gateway Trust to Moat Primary School. The winning poems will be put on display at Tuffley and Matson libraries and Gloucester Services, along with other entries.

Cllr Dave Norman, Gloucestershire County Council cabinet member responsible for libraries, said: “Congratulations to everyone who took part in this wonderful competition. They should all be proud of their work as the standard of entries was very high. It’s fantastic that so many pupils were inspired to write poetry and I hope people enjoy seeing their work displayed in Tuffley and Matson libraries and Gloucester Services.”

Ziggy Dicks, from Gloucestershire Poetry Society, said: “Thank you and congratulations to everyone who contributed to the competition. There is a real opportunity for those who took part to take their poetry further, so keep writing, it gets easier.”