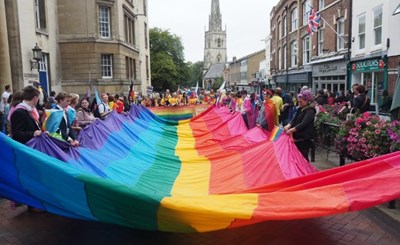 Friday 17 May 2019 is the International Day Against Homophobia, Biphobia and Transphobia (IDAHOBIT day).

The day aims to coordinate international events that raise awareness of LGBT+ issues and promote LGBT+ rights work worldwide. IDAHOBIT represents an annual landmark to draw the attention of decision makers, the media, the public, opinion leaders and local authorities to the alarming situation faced by lesbian, gay, bisexuals, transgender and intersex people and all those who do not conform to majority sexual and gender norms.

Since 2006, Rainbow Railroad has helped over 500 LGBT+ individuals escape violence and persecution in their home countries.

The event will be led by the council’s LGBT+ employee network, Prism. Other local organisations taking part include Gloucester Cathedral and The Diocese of Gloucester.

Council staff will meet outside Gloucester Cathedral at 1pm, dressed in bright colours to begin their march through Gloucester city centre, finishing around 2pm outside the county council offices at Shire Hall, Westgate Street.

Mark Sandles, chair of Prism, said, “This year we are taking to the streets to show that as a council we promote equality in our community. I’m also proud to launch our Transgender Ally Pledge today, with our senior management ambassador, corporate director Jane Burns, becoming the first official Trans Ally in the organisation. Pledging to be an Ally of the community makes all the difference to stamping out hate.”

Jane Burns, director for Strategy and Challenge at Gloucestershire County Council, added, “We are reaching out to our partners to show a united front on this important issue. As an organisation we are committed to the equality of opportunity, and we do not tolerate homophobia, biphobia or transphobia. The council recognises that although attitudes towards LGBT+ people have improved in recent years, there is still work to do to.”

Here are some links where you can find support: