A Gloucester man was thwarted in his bid to sell nearly 1,000 counterfeit car badges by Gloucestershire trading standards officers. 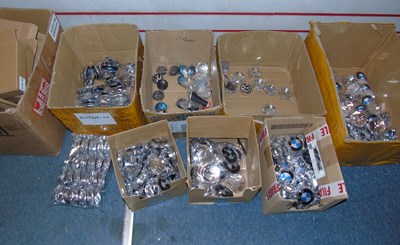 He pleaded guilty to four offences, one relating to the sale of a BMW bonnet badge on 8 November 2018 and three relating to the possession of a total of 976 Volkswagen, Ford and BMW car badges with intent to sell them when his business was raided in March 2018.

He ran a legitimate business selling car parts and spares but also had a sideline in fake car accessories through online markets including eBay, which he ran from a unit in Chase Lane, Gloucester.

After a tip-off, trading standards officers searched the unit on 14 March 2018, where they seized mobile phones, computers and nearly 1,000 items valued at more than £9,000, all of which were examined and found to be counterfeit.

Some contained incorrect product codes, had been produced in different colour combinations to genuine items and were of inferior quality.

The investigation discovered that Sobieszuk had been selling the car badges under various company names.

Computer records showed Sobieszuk had been warned about the sale of fake VW accessories by the manufacturer in 2017 and that Amazon had blocked his account when he attempted to sell his fake car badges.

However when questioned, he denied fully understanding what counterfeit meant and claimed the items he sold were genuine.

Sobieszuk told trading standards officers that the items were samples, even though they found multiple copies of several designs and a number of envelopes ready for posting containing receipts for payment.

Analysis of his financial records confirmed payment for each of these items and identified further significant sales of car badges.

Sentencing will follow the outcome of confiscation proceedings under the Proceeds of Crime Act, which orders a convicted defendant to repay the amount they gained from the crime.

Karen Smith, head of Gloucestershire trading standards, said: “This case should act as a warning to anyone dealing in counterfeit goods that they will be prosecuted. Their illegal activities harm the trade of legitimate suppliers and they will not get away with it as we will take action to bring them before the courts.”