Covid-19
Information on COVID-19
Book a test
Help Hub
Recruiting care workers
Information in press releases is correct at publish date but may now be out of date.

They think it’s all Over – it is now

Work is now complete on a £3.3m package of work centred on the busy Over Roundabout in Gloucester. 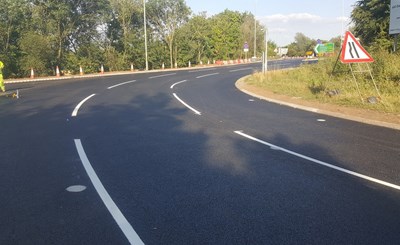 Back in April Gloucestershire County Council invested £400k when the A417 Over Causeway was resurfaced between Westgate Bridge and Over Roundabout with highway crews laying over 3000 tonnes of material along the 900m stretch of road.

Soon after the completion of this resurfacing, essential work began on the A40 Over Roundabout itself. The roundabout is one of the busiest junctions in the county and a key point of entry for Gloucester. The much needed improvement scheme has increased the capacity of the roundabout, by widening the Westbound and Southbound approaches and adding a third lane within the roundabout.

New retaining walls were also built and upgraded LED lighting was added. The work aims to help relieve congestion, save commuters time and allow traffic to flow more smoothly. The total investment in the A40 Over Roundabout scheme was £2.8m. £2.2m was provided by GFirst LEP, £406k from Highways England and a further £120k from S106 Developer contributions.

Then, starting in September, and recently completed, essential bridge maintenance was carried out on the A417 Over Causeway. The county council invested a further £130k into this work. It was out with the old and in with the new, 14 of the new in fact. 14 new joints have now been installed on the bridge, with a total length of 102 metres. Not only are these joints brand new, but they’re also much better which will drastically reduce the need for future maintenance of the bridge. To make the most of the time spent at Over Causeway, 640 metres of drains were also cleaned; helping water to drain away and reducing the risk of flooding.

Cllr Vernon Smith, cabinet member for highways, said: “I’m really pleased that all the work we’ve carried out at this key entry point to Gloucester has been successfully completed and I’d like to thank people for their patience whilst we carried out these improvements.

“We are continuing our £150m investment programme into Gloucestershire’s roads alongside our major projects like the Over Roundabout improvements and this is making a real difference to the condition of our roads and helping to keep our county moving.”