Although we are enjoying some great autumn weather at the moment, Gloucestershire County Council is already preparing for the winter ahead. 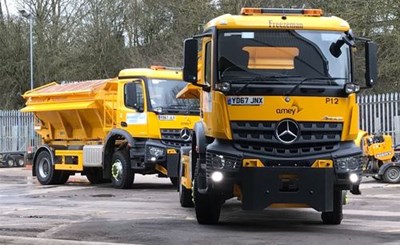 This week our fleet of 29 gritters are out on their first practice runs of the season.

As part of the test runs, teams also inspect the winter maintenance equipment such as snow ploughs and in-cab mobile phones, and are briefed on this year's winter response plan which covers key contacts, procedures, roles and responsibilities.

Last year, the county council’s gritting teams completed over 90 gritting runs dealing with the four snow events including the “Beast from the East”.

This year the county is starting winter with just over 11,000 tonnes of salt, with covered salt domes based in Stroudwater, Cannop, Moreton and Cirencester.

Bagged salt will also be delivered to parishes to replenish the community stock, and the county’s 4,826 grit bins will be refilled before the end of the month.

Cllr Vernon Smith, cabinet member for highways said “We’re preparing our highways teams for when the cold weather really hits. When our gritters head out for real they will be spreading salt over 1,000 miles of the county's roads.

“Our road crews are the first line of defence in winter weather; they put in a tremendous effort - battling against the elements around the clock to keep the county moving.”