British Empire Medals (BEM) awarded to local people in recognition of their contributions to community life. 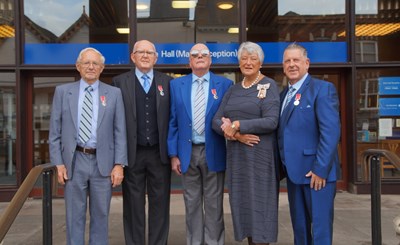 Ray Peart, William (Bill) Morgan, Byron Jones and Lyndon Baglin were presented with their BEM awards by the Lord-Lieutenant of Gloucestershire, Dame Janet Trotter, at Shire Hall on Wednesday 17 October 2018. A special awards ceremony was held to honour their contributions to community life.

Ray, 72, sadly lost his sight in 1973 due to an explosion in Northern Ireland, whilst serving with the Gloucestershire Regiment (Glosters). Since then, he has committed himself to raising funds for over 30 charities and good causes both local and international. Ray received his award for his services to injured service personnel and charity.

William, (Bill), 83 has dedicated himself both professionally and in his charitable work to Bristol’s aerospace heritage. He has shown outstanding dedication to preserving the regional history by acquiring planes and returning them to their former glory as museum exhibits.

Byron, 68, has been a professional organist for more than 50 years. He has been committed not only to sharing but also preserving the music of the Theatre Organ. His charity work is intertwined with the concerts he holds. One of the aims of his ‘Music for All’ festivals, as well as providing entertainment for his patrons, is to raise money for charities. He has not only organised many events himself but has also catered for them so that all the proceeds go to chosen charities.

Lyndon, 80 is an ambassador of the euphonium with a career spanning seven decades, including being principal euphonium with some of the finest brass bands in the UK and winning awards throughout his career. Lyndon received his award for his contribution and continued services to brass band music.

Dame Janet Trotter, Lord-Lieutenant of Gloucestershire, said: “I am proud to have been able to present such a prestigious award to four wonderful gentlemen. The award recognises their hard work and dedication to charity, history and music, for which they should be very proud of what they have achieved”.

A BEM Award is presented to an individual who has shown meritorious civil or military service worthy of recognition by the Crown.