En-route to fixing the A417 ‘Missing Link’

Residents, businesses and commuters have less than two weeks left to have their say on the design proposals for a new section of the A417 could be built to fix the ‘Missing Link’. Here is how to give your feedback to Highways England. 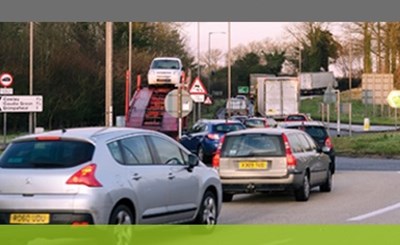 The A417 ‘Missing Link’ is a three-mile stretch of single-lane carriageway on the A417 between the Brockworth Bypass and Cowley Roundabout in Gloucestershire. For many years the ‘Missing Link’ has posed problems for road users and local people including congestion, which causes road users to divert onto unsuitable minor roads blighting local communities. Poor visibility and other factors mean that accidents, many of which are serious, occur far too frequently on this stretch of road.

Highways England’s public consultation into the preferred route chosen for this stretch of road launched on 27 September 2019 and will run until 8 November 2019.

Following a number of successful events in the county, maps and consultation documents are still available at local information points and online.

Residents still have time to have their say on “Option 30”, which is the Highways England preferred option, supported by Gloucestershire County Council. To make sure as many people as possible have a chance to give their views, Gloucestershire County Council is supporting the consultation by hosting information points in some libraries and has made the plans available at Shire Hall.Cllr Nigel Moor, cabinet member for environment and planning, said, “One of the key objectives of this scheme is to reduce delays and congestion. Unnecessary congestion contributes massively to air pollution, and as Gloucestershire moves forward in its commitment to be carbon neutral by 2050, sustainable methods of transport such as bicycles, ultra low emission buses, electric cars and vans need safe, high quality highways to get around.

“It’s a legal requirement for Highways England to ask for feedback on the route they prefer the A417 to take. This means we are one step closer to seeing spades in the ground, as these plans to fix the ‘Missing Link’ take shape. We need to keep the pressure on to make sure things continue to move forward, this is a key stage of the process to make sure the design proposals become a reality.

“We want as many people as possible to get involved in this consultation. Have your say, spread the word with family and friends - urge them to get involved.”

Find out more about Highways England's consultation and the A417 scheme online here.

For more than 20 years, Gloucestershire and surrounding counties have been looking for a solution to the ‘Missing Link’ on the A417. The 5km stretch of road, near Nettleton Bottom, is the only single carriageway along the strategic 50km route between the M4 and M5.

The route is a key link between the West Midlands and London and is used daily by more than 34,000 vehicles. The ‘Missing Link’ is often very heavily congested and there are frequent collisions, affecting people across Gloucestershire and further afield.

Gloucestershire County Council and many of its partners have campaigned and lobbied Government for a solution to the stretch of road. In 2018 Highways England held a route options consultation, explaining how road designs had been narrowed down to two options. Residents, businesses and commuters where asked to give their thoughts on the two options. The preferred route option, route 30, is now available for people to comment on until 8 November 2019.