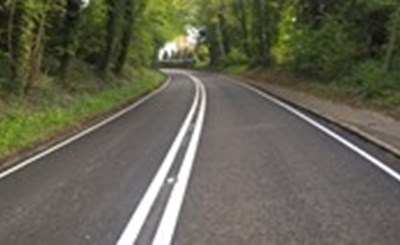 The highways contractor will be working at the A4173/A46 junction at Pitchcombe over the next few months changing it to a “give way T-junction” with right turn lane on the A46, and adding better street lighting and signs. Crews will also be putting in “toad pods” to assist local wildlife groups during the toad migration season.

Crews from Knights Brown will be onsite from 7 October, and works are estimated to finish in early Spring 2020. There will be three-way traffic lights in place 24/7 throughout the whole scheme duration for the safety of road users and the workforce.

The work at this key junction form part of the wider A4173 safety improvements package which the county council has been working on for around 18 months.

Local residents and businesses are invited to find out more and meet the contractor on Monday 7 October, 2pm - 6pm in Pitchcombe Village Hall. Highways officers from the county council will also be on hand to answer any questions or queries about the work.

Cllr Vernon Smith, cabinet member for highways, said, “I’m pleased to see work starting on this problem junction. The county council has spent many months making improvements to the road to reduce the risk of collisions, and this is the final piece of the Pitchcombe puzzle.”

Cllr Keith Rippington, local member for Bisley and Painswick, said, “This is a major route for visitors and commuters between Stroud and Gloucester, so I’m pleased to see the road will stay accessible for most of the scheme. These improvements are vital, however as with any road works, there may be delays, so please plan your journeys.”

Andrew Eilbeck, divisional director for Knights Brown said: “We’re glad to be working with Gloucestershire County Council to help resolve the issues of this problematic junction.”

The junction has a long record of collisions and near misses and, whilst some works have already been implemented to improve safety, it has remained a concern for the local parish councils, residents and commuters alike.

The story so far…

The county council successfully bid for £2.16 million from the Department for Transport (DfT) Safer Roads Fund to improve safety and road conditions for the A4173 near Stroud, after it was identified that safety improvements were needed as a priority.

Over the last 18 months Gloucestershire County Council has been completing improvements to this key route, including 74.46km² of resurfacing, drainage works and two new pedestrian crossings, with this contract being the latest and the last stage.

Earlier in 2018 extensive drainage repairs, vegetation clearance and safety improvements were carried out on the A4173, a key commuter and bus route between Stroud and Gloucester, as part of a package of works. This was ahead of a major resurfacing scheme which started in May 2018, where we laid a shiny new road surface along the entire five-miles of road in less than seven weeks.

In November our crews finished upgrading the pedestrian crossings and widening the footway around St Peters School on the A4173. Two new puffin crossings, equipped with sensors that can detect whether any pedestrians are on the crossing, will assist those who need some extra time to cross the road.