Members of a children’s writing club at Tewkesbury Library are celebrating the release of their first book. 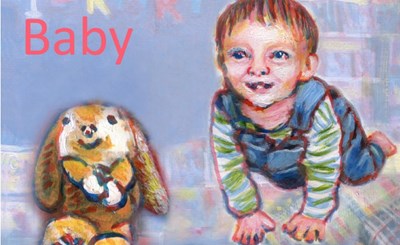 The Tewkesbury Library Creative Writing Group was set up a couple of years ago after a 12-year-old girl suggested the idea to the library. It started with four members and is now made up of about 10 children, aged seven to 15.

The talented group has written a children’s storybook between them called Carrots and the Baby. It is about a toy rabbit called Carrots, who lives in Tewkesbury Library and has exciting adventures when he wakes up at night and falls into stories.

Local artist Marion Yeo has illustrated the book and the illustrations are based on the library itself. It will be printed on 24 October at Packwood Printers and 25 copies of the book will be on sale for £3.50 each during half-term, starting on Monday 28 October.

If enough funds are raised from the sales the money may be used for a second print run or to extend creative writing activities for this age group in Tewkesbury.

Marion’s own artwork, as well as the original paintings for the book, will be on display at the library from Monday 28 October to Saturday 9 November and there will also be special storytime sessions and activities featuring the book. On Monday 28 October at 2.30pm and on Friday 1 November at 10.30am, sessions called ‘Imagination Story Station – reading, sharing, creating and playing with stories’ aimed at KS1 children will be held. There will also be an exciting display by interactive design studio Stand and Stare.

Marion Yeo said: “When I read the group's story I thought it was a great achievement and wonderfully imaginative. Along with their suggestions and ideas, the story easily inspired lots of visual images which helped me to create the illustrations. I hope lots of people visit the library to buy a copy."

Cllr Dave Norman, Gloucestershire County Council cabinet member for libraries, said: “The creative writing group at Tewkesbury Library should be very proud of their efforts. The members of the club have written a wonderful story and shown great initiative to get it printed. This shows how libraries can help develop the great talents of young people in our communities and I wish them every future success.”