Modern Slavery is closer than you think and is happening in  Gloucestershire. On Friday 18 October local organisations, businesses and community groups took part in an event to find out more about national Anti Slavery Day. 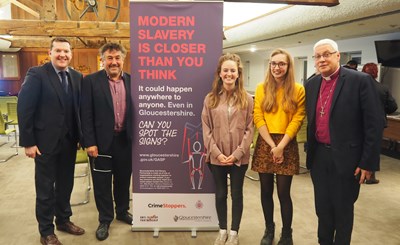 Modern Slavery is the illegal exploitation of people for personal or commercial gain. Victims are trapped in servitude, which they were deceived or coerced into and feel they cannot leave.

In 2018, 61 potential victims of modern slavery and human trafficking were identified in Gloucestershire. However, the picture is not complete and there are ways residents, businesses and community groups can help public sector organisations to tackle the problem.

National Anti-Slavery Day is on 18 October each year and to mark this the Gloucestershire Anti-Slavery Partnership (GASP) held an event in North Warehouse, Gloucester for the local community to find out more about modern slavery and human trafficking in Gloucestershire, hear the stories of survivors and discover what everyone can do to stamp out the slavery in our county.

Peter Bungard, chair of the Gloucestershire Anti-Slavery Partnership, said, “Modern Slavery is an under-reported and often hidden crime that we are only just beginning to understand. Despite slavery being abolished in 1833, we unbelievably still see it here on our doorstep. We need people in Gloucestershire to help us protect vulnerable people by spotting the signs of modern slavery and reporting what they see.

“We are reviewing our commercial policies to eradicate any chance of modern slavery from our supply chains, and I want to encourage all businesses to do the same.”

Public sector organisations all hold responsibilities to report when they see signs of slavery or human trafficking, so as part of the commitment to stamp out modern slavery, members of the partnership have trained over 400 public sector staff, with more online training being rolled out in the coming weeks.

Speakers at the event included Amy and Rachel from Unseen, leading anti-slavery charity which runs the Modern Slavery Helpline, and the Bishop of Tewkesbury, The Rt Revd Robert Springett who spoke passionately about the Clewer Initiative. GASP and the Deputy Police and Crime Commissioner, Chris Brierley, also spoke about what is being done to tackle Modern Slavery.

The event included a small exhibition about the history of slavery and trafficking in Gloucestershire from the Heritage Hub, and guests had the opportunity to speak to representatives from Victim Support and local Abolition Groups who were on hand to provide information.

More information about GASP and the signs of modern slavery can be found online here. 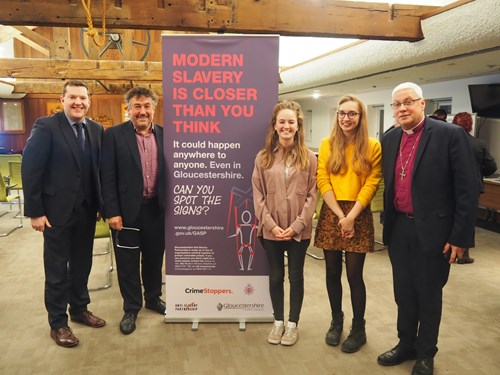 According to the Global Slavery Index, in 2016, at any given time, an estimated 40.3 million people worldwide were in modern slavery, including 136,000 in the UK. However, last year only 6993 potential victims of modern slavery and human trafficking were identified in the UK, including 61 in Gloucestershire.

Unseen are a charity working to help victims of modern slavery to find the support they need to change their lives. Unseen run the Modern Slavery Helpline, providing victims, the public, statutory agencies and businesses with the ability to report concerns and a place to get advice. Unseen also provide education and resources to schools, businesses and community groups. More information about Unseen can be found online at unseenuk.org/

The Clewer Initiative enables Church of England dioceses and wider church networks to raise awareness of modern slavery, identify victims and to help provide victim support and care. You can find out more information about what they are doing, including their Safe Car Wash app, online at theclewerinitiative.org/