Three people have been convicted of selling illegal tobacco from a shop in Gloucester. 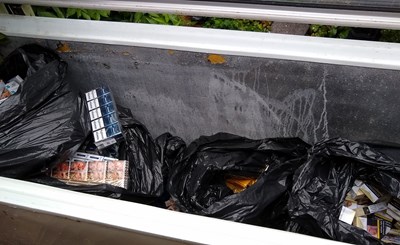 At the time Hashmi and Namiq were working at Erbil Mini Market, 82 High Street, Gloucester, where Fero was the owner of the shop.

Fero was sentenced to a 12-month community order, with a requirement to complete 120 hours of unpaid work, and was ordered to pay £858 costs and an £85 victim surcharge. The tobacco seized from Fero was worth £5,600.

Hashmi was sentenced to a four month community order. He was given a four month curfew between 8pm and 6am every day and was ordered to pay £563 costs and an £85 victim surcharge.

Namiq was sentenced to 12 weeks in custody suspended for 18 months and all three had pleaded guilty to the charges.

Trading standards had received complaints that the shop was a source of illegal tobacco but had been unable to identify any stored within the premises.

A test purchaser was sent into the premises on 15 May 2019, equipped with covert recording equipment. The purchaser was sold illegal tobacco by Namiq, and Hashmi took the purchase price and placed it in the till.

Fero was the owner of Erbil Mini Market when another test purchase was undertaken on 12 June 2019. He had been advised that illegal tobacco was being sold from the premises before he took over and was present the following day when an inspection was carried out.

A sliding fence panel was discovered between the rear yard of the mini market and the overgrown yard of premises next door, where there was a display freezer containing illegal tobacco. A haul of 1,220 packs of cigarettes and 122 pouches of hand rolling tobacco were seized.

Erbil Mini Market was the subject of a three-month closure order from June 2019 but it never reopened.

Both Hashmi and Namiq have been previously prosecuted by trading standards for the sale of illegal tobacco.

Cllr Dave Norman, cabinet member for trading standards, said: “These sentences send a message to anyone considering breaking the law in this way. The sale of illegal tobacco undermines legitimate businesses and poses a significant risk to public health.

“Anyone with information about illegal tobacco sales can report their concerns to trading standards via the national consumer helpline 0808 223 1133.”