Gloucestershire’s COVID-19 case rate continues to increase steeply as the impact of the UKHSA laboratory testing issues filters through. Up to 12 October, the county’s infection rate will have appeared lower than it really was due to many tests giving an inaccurate negative result (false negatives). 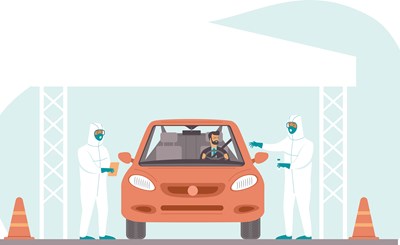 Since samples were redirected to alternative labs, and a proportion of the individuals have retested, the confirmed case rate in Gloucestershire has increased by 327.7% to 634.2 per 100,000.

It is likely that the county’s case rate will continue to rise steeply in the next few days – potentially appearing to be among highest levels in the UK before settling to a truer position of positive cases in the county once those that have come forward for retesting have received results.

At the moment it is unclear how much of the county’s increase is due to those affected by the lab issues coming forward for retesting and how much is ‘new’ infection. As a result, it is not possible to accurately estimate the current accurate rate in the county or the precise numbers of false negatives as a result of the incident.

Sarah Scott, Executive Director for Adult Social Care and Public Health said: “As a result of the laboratory issues, from the middle of September up to 12 October our infection rates will have appeared lower than they really were. Now that samples have been redirected to other labs, the confirmed case rate in Gloucestershire has increased considerably. At the moment it is unclear exactly how many of these new cases are linked to incorrect test results because a proportion will be people coming forward to retest.  However, the number of positive cases is likely to continue rising steeply, possibly towards some of highest levels in the UK, before settling to our actual rate.

“There will almost certainly have been additional community transmission as a consequence of these problems which will result in more people needing the care and support of our hardworking NHS and social care colleagues. Everyone affected should have already received a message from NHS Test and Trace on any action they need to take but we have been encouraging everyone who received a negative test during the identified period to take another one, if they haven’t already, as a precautionary measure.”

Investigations continue into the precise cause but NHS Test and Trace estimate that around 400,000 samples have been processed through the lab, the vast majority of which will have been negative results, but an estimated 43,000 people may have been given incorrect negative PCR test results between 8 September and 12 October, mostly in the South West of England, including Gloucestershire.

The UK Health Security Agency (UKHSA) has stated that this is an isolated incident linked to one laboratory and that there is no evidence of any faults with LFD or PCR test kits themselves and the public should remain confident in using them and in other laboratory services currently provided - all samples are now being redirected to other laboratories.

NHS Test and Trace have now contacted all of the people that could still be infectious to advise them to take another test. Close contacts who are symptomatic are also advised to take a PCR test in line with normal practice.

Information on how you can get a PCR test is available on our website. The Government’s website provides further information and advice on how to stay safe and help prevent the spread of covid-19