Gloucestershire County Council has today added its name to a charter aimed at helping employees who become terminally ill at work. 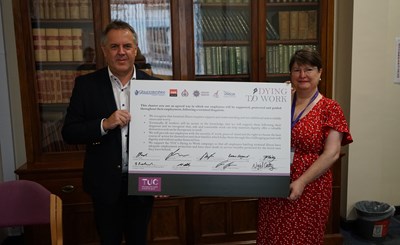 The local authority is the latest employer to sign up to the Dying to Work Voluntary Charter, following in the footsteps of the likes of Rolls-Royce, Royal Mail and the Co-op.

The charter is part of the wider Dying to Work campaign led by the Trades Union Congress (TUC), which is seeking greater security for terminally ill workers, so they cannot be dismissed as a result of their condition.

It was taken forward by the TUC in 2016 following the case of Jacci Woodcock, an area sales manager from Derbyshire who was forced out of her job after being diagnosed with terminal breast cancer.

The TUC is asking employers to sign up to its voluntary charter to stop cases like Jacci’s happening in the future. The county council already protects the rights of terminally ill staff, but agreed to sign the charter to publically show its support and to call on other employers to do the same.

It was signed today by Cllr Lynden Stowe, cabinet member for finance and change, and Cllr Kate Haigh, deputy leader of the Labour group at the county council, who proposed a motion at a full council meeting in June calling for terminally ill employees to be given greater protection.

Cllr Stowe said: “We are pleased to show our support for the Dying to Work Voluntary Charter today, particularly as it coincides with Macmillan’s World’s Biggest Coffee Morning which helps people living with cancer. It’s important that employees who are diagnosed with a terminal illness know they will be supported and not face any additional stress. We hope that by signing this charter we will provide any employees and their families going through this ordeal with security and peace of mind.”

Cllr Haigh said: “The county council already has procedures in place to support staff and their loved ones when facing a terminal diagnosis but it’s important to place this support on record and set an example to others. I’m pleased the charter has been signed today to help people living in these difficult circumstances and I hope other employers do the same.”

TUC South West Regional Secretary Nigel Costley said: “Your job should be the least of your worries when you get a terminal diagnosis. I’m delighted that Gloucestershire County Council has shown real leadership in this area, working with unions to guarantee fair treatment for terminally ill workers.

“We now have a million workers being covered by the Dying to Work charter across the country and we expect more employers to commit in the coming months.”