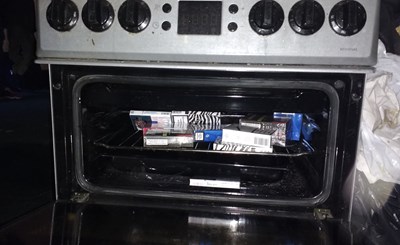 On Wednesday 11 September 2019, five men were sentenced at Cheltenham Magistrates Court for their involvement in a shop in Gloucester which was run for the sole purpose of selling illegal tobacco.

The investigation into the shop spanned a six month period at the beginning of 2018. Asian and European Store, 124 Eastgate Street, Gloucester was identified by Gloucestershire Trading Standards Service as being the main source of illegal tobacco in Gloucester.

During the investigation, the shop was leased to Nzar Osman, aged 37 of Reevy Avenue, Bradford. Mr Osman admitted putting his name on the lease in return for £500 month. Although he took no active part in running the business, Mr Osman was informed by trading standards officers that the shop was operating solely to sell illegal tobacco and he did not take action to prevent this.

Mr Osman accepted that he assisted in the supply of illegal tobacco by allowing the shop to stay open and pleaded guilty to 14 charges relating to the supply of counterfeit tobacco and fraudulent evasion of duty. Mr Osman was sentenced to 24 weeks in prison.

Four other men were also involved at various points during the six month period:

All four men were present in the flat above Asian and European Store on 8 February 2018 when trading standards officers assisted by Gloucestershire Police executed an entry warrant at the premises.

Illegal tobacco was found in the kitchen floor, where a chute was used to deliver the tobacco into the shop below. Further tobacco was found in the oven as well as in a hidden compartment under the stairs. The illegal tobacco seized would have netted the shop nearly £8k and more than £10k of duty was evaded. Trading Standards Financial Investigators also seized £5200 in cash under the Proceeds of Crime Act. The money was hidden in the bottom of the sofa, the toaster and a bag in the bedroom.

A further raid was carried out by Gloucestershire Police at the flat on 1 April where they found £14k worth of illegal tobacco which evaded £18k in duty. Three further raids were carried out at the shop by Trading Standards on 21 May, 4 June and 6 June 2018.

In total, trading standards officers seized 4,355 packets of 20 cigarettes and 1,386 pouches of 50g hand rolling tobacco from the premises which would have netted the shop nearly £30k whilst evading £38k in duty.

You can get in touch with Gloucestershire Trading Standards on 03454 040506, email tradingstandards@gloucestershire.gov.uk or anonymously via their website.

What does “fraudulently evading duty” mean? 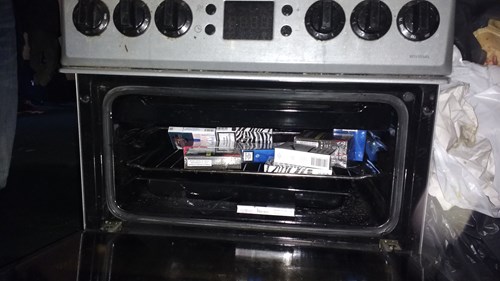 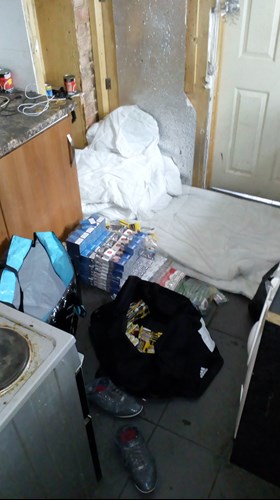 Tobacco under the stairs: 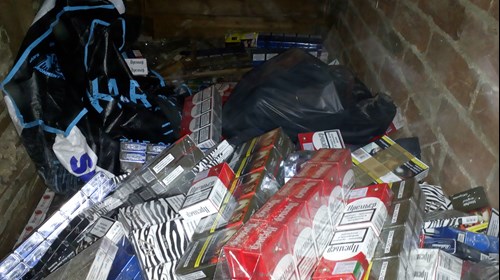