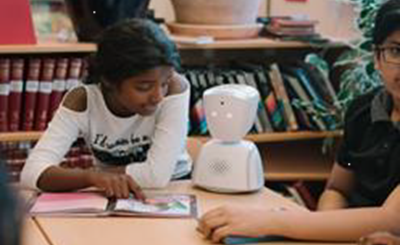 We have successfully been using AV1 robots in our hospital schoolroom and outpatient team since 2019.

First introduced to us when we took part in a Department for Education funded project to investigate improving educational opportunities for children who are too unwell to attend school, the AV1s are now an integral part of our provision enabling students to access lessons, maintain social links with their peers and facilitate a smooth transition back to school.

These small telepresence robots sit in the classroom in place of the child, and via a one way video stream, the child can join in lessons by listening, watching the teacher, asking questions, and participating in discussions. The child operates AV1 from an ipad, wherever they might be; whether they are undergoing treatment in hospital or recovering at home.

Liam was struggling with his cancer diagnosis and finding it difficult to confide in anyone about how scared he felt. Although he was engaging with our teachers and enjoying our lessons, he was missing school and, due to his condition, was unable to see any of his friends. Parents reported that there had been a significant decline in his mood; he was staying in his room all the time, refusing to get dressed or come downstairs to eat with his family. There were a growing number of angry outbursts and parents were increasingly concerned about his mental health and wellbeing, as well as his physical health.

In addition to the lessons he received with us, the AV1 was introduced as a way of feeling more connected to school. It not only enabled him to access some of his lessons with his home school, but also to make contact with his teacher and his friends. The AV1 was even taken out into the playground at break times. This had a remarkable effect on his mood and behaviour at home. Liam reported that “I laugh lots now and don’t feel like I’m missing out all the time”, whilst his parents felt that it allowed their son to feel ‘normal’ again.

Sam and Megan were admitted due to their Cystic Fibrosis. Usually Cystic Fibrosis patients are unable to meet due to risks around cross-infection. Sam is a recurring patient who displays low self esteem around learning, with anxiety and instances of challenging behaviour – which have been witnessed by Megan and had made her wary of Sam. Through the use of the robot, both children were able to participate in the same lessons. Sam adopted the role of teacher; sharing information and passing on tips and advice to Megan – giving him a noticeable boost in confidence. Not only did both children enjoy using the technology, they both demonstrated improved engagement and benefitted from chatting about their conditions. Sam’s behaviour and focus were greatly improved, whilst Megan reported that the robot had enabled her to see another side to Sam’s character. She said, “I like talking to someone else with CF. My other friends don’t understand what it’s like”.