The Gloucestershire Anti Slavery Partnership is a multi-agency response to the evils of human trafficking and modern slavery within the county.

Bringing together a number of key local agencies that could come into contact with potential victims and perpetrators of these crimes, the purpose of the partnership is to tackle these issues at a local level through strategic collaboration, information and intelligence sharing, in accordance with the Government’s 4Ps modern slavery strategy: Pursue, Protect, Prevent and Prepare.

The Anti Slavery Partnership has grown from an Avon & Somerset initiative to cover the whole of the South West region - recognising that slavery and trafficking have no boundaries.

There are a number of advantages of a regional structure including sharing of intelligence and expertise, joined up work on cross-border cases, better support of frontline staff and care for victims and potentially an increased number of prosecutions.

In order to gain a balance between prioritising both local and regional agendas and recognising that different areas face different issues and require different responses, the creation of force level ASPs, across the South West region, allows a wider range of stakeholders to participate at a local level, which will then feed in to the regional picture.

What is modern slavery?

Modern Slavery is the illegal exploitation of people for personal or commercial gain. Victims are trapped in servitude, which they were deceived or coerced into, and feel they cannot leave.

Modern slavery is an under-reported and often hidden crime that we are only just beginning to understand.

What are the signs of modern slavery?

Modern Slavery is closer than you think. It can happen anywhere to anyone, even in Gloucestershire. There are lots of organisations who work together to protect vulnerable people, but the picture is not complete and they need your help. You could be the missing piece if you spot these signs:

Physical Appearance – Victims may show signs of physical or psychological abuse, look malnourished or unkempt, or appear withdrawn and neglected. They may have untreated injuries.

Isolation - Victims may rarely be allowed to travel on their own, seem under the control or influence of others, rarely interact or appear unfamiliar with their neighbourhood or where they work.

Poor Living Conditions - Victims may be living in dirty, cramped or overcrowded accommodation, and / or living and working at the same address.

Few or no personal effects - Victims may have no identification documents, have few personal possessions and always wear the same clothes day in day out.

Restricted freedom of movement – Victims may have little opportunity to move freely and may have had their travel documents retained e.g. passports.

Unusual travel times - They may be dropped off / collected for work on a regular basis either very early or late at night.

Reluctance to seek help - Victims may avoid eye contact, appear frightened or hesitant to talk to strangers and fear law enforcers for many reasons, such as not knowing who to trust or where to get help, fear of deportation, fear of violence to them or their family. They may be accompanied by someone else who speaks for them.

The 2015 Modern Slavery Act came into force on 31 July 2015. It consolidated many pre-existing slavery and trafficking offences, increased sentencing powers, and created the post of the Independent Anti-Slavery Commissioner to ensure that law enforcement, public authorities and the voluntary and private sectors work together to address these serious crimes in a cohesive and effective way. The Government has since made the eradication of modern slavery a priority.

It is estimated that there were between 10,000 and 13,000 potential victims of modern slavery in the UK in 2013. In 2015, 3,266 potential victims were identified and referred to the National Referral Mechanism (NRM).

What you can do

As part of our commitment to stamp out Modern Slavery in Gloucestershire we will be rolling out online training. So far over 500 staff from GASP organisations have completed this training, and soon it will be available to all - from community groups to Parish and Town Councils and everyone in between.

In the meantime, please watch these short videos from our partners:

1. What is Modern Slavery and Trafficking?

3. The NRM, duties and requirements

4. Responding to a potential victim of trafficking

MSTPU online training for first responder is available from policingslavery.co.uk/transforming-our-response/training-delivery/first-responder-training/ 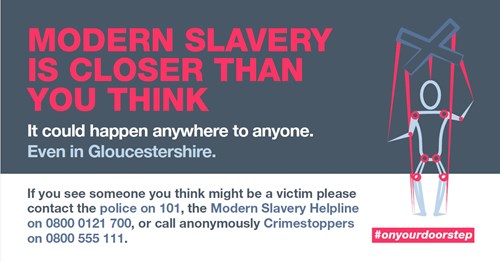