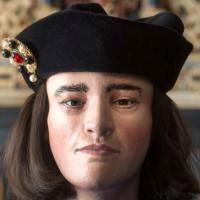 Gloucester City Museums' 'Richard III, Duke of Gloucester' exhibition was a huge success, and gave visitors to it a chance to get up close with the King himself, and to meet the team who were at the heart of the 'Looking for Richard' project.The facial reconstruction of Richard III has now returned to Leicester, but part of the exhibition is still available on-line thanks to a partnership between Gloucestershire Archives and Gloucester City Museums.

Duke of Gloucester and Last Plantagenet King of England

Richard was the last Plantagenet King of England, and the last English King to die in battle. It is often said that his death marked the end of the Middle Ages.

Before becoming King, he was known as the Duke of Gloucester. As well as giving him his name, events in Gloucester played a crucial role in his rise to, and fall from, power. 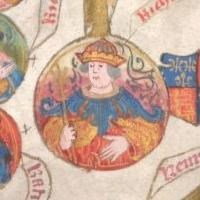 The disappearance of his young nephews - 'The Princes in the Tower' - and the villainous character in William Shakespeare's play - 'Richard III' - make him infamous to some. Others see him as an unjustly maligned hero.

In 2012 he captured the headlines and the public's imagination once again when his remains were found under a car park in Leicester and the controversy was re-ignited.

Illustration: Miniature of Richard III from the Biblical and Genealogical chronicle of Edward VI, c. 1511 © The British Library Board, Kings MS 395

Richard Plantagenet became known as 'Gloucester' from the age of 8 when his brother, Edward IV, made him Duke. 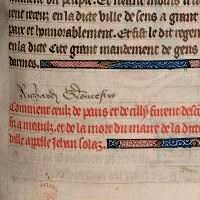 He had an unsettled childhood. The War of the Roses was raging between his family, the Yorkists, and the Lancastrians who both claimed the throne. Richard had already been a prisoner, a refugee abroad and suffered the brutal killing of his father and a brother before Edward won the throne at the bloody battle of Towton.

Once Duke he was sent north to be educated in the household of his brother's ally the Earl of Warwick, a man so powerful he was said to be 'Warwick the Kingmaker.' In the Kingmaker's Yorkshire Castles he learnt the arts of dancing, courtesy, hunting, hawking and war.

Richard was sixteen when his protector, the Earl of Warwick, turned against the King. However Richard chose to remain loyal to his brother Edward IV despite another brother, the Duke of Clarence, joining the Kingmaker in rebellion. Together Richard and Edward endured hardship and danger to win. So by the time Richard was seventeen he had been rewarded with position of Constable of England. As such he was charged with suppressing growing discontent in South Wales and raised an army in Gloucestershire, Worcestershire and Shropshire to do so.

While Richard was in Wales, Clarence and the Kingmaker's forces threatened once again. Twice he headed 'Commissions of Array' in Gloucester and Hereford to recruit support for the King. However it was in vain as Richard and the King were forced to flee to the Netherlands. It is said that they boarded the ship on Richard's 18th birthday. 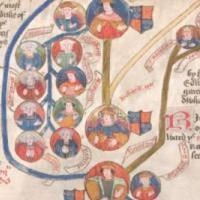 In it he says this was 'because of the special affection which we bear towards the said town of Gloucester'. Although that is the flattering language which is always found in medieval royal documents, there are unusual features of Gloucester's charter and the benefits it bestowed that suggest he really meant it.

A Reward for Service

Towns had to pay a large fee for their charters, Gloucester did not. It is extraordinary that Richard went on to say that Gloucester only had to pay a third of its annual tax due to the Exchequer. The reason he gave for granting this privilege is as unusual: 'good and faithful actions... in causes of particular importance to us'. We can only guess at what those causes were. 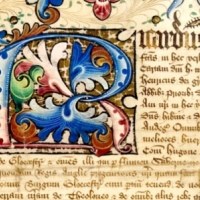 Gloucester became a county in its own right 'entirely distinct and separate from and no parcel of the county of Gloucestershire'. A large slice of Gloucestershire, including thirty or so villages and hamlets with all of their local taxes, was handed over with it. Only Richard's other favoured city, York, could boast such a large territory.

For the first time a mayor could be elected. Gloucester had already had mayors, but unofficial ones. Now not only was the mayor authorised, but a sword was to be carried before him so no one could doubt his authority. Whereas the other concessions have gone, Gloucester still exercises this right.

Illustrations: The genealogy of Edward IV, Richard III and Henry VII, drawn to demonstrate that Henry was entitled to be King. From The Biblical and Genealogical Chronicle of Edward VI, c. 1511 © The British Library Board, Kings MS 395

At the age of nineteen, in 1472, Richard married Anne Neville.

Although only sixteen, she had already been married to Margaret of Anjou's son, killed by Richard and Edward's army at Tewkesbury. She was the daughter of Warwick the Kingmaker, killed by them at Barnet. Despite these events it is generally thought they were in love having known each other since growing up together on the Kingmaker's estates.

Lord President of the North

While Edward IV ruled from London, he entrusted his brother Richard to look after the north of England in his name. Richard duly set up the 'Council of the North' to keep the peace with himself as its Lord and President. This work, and the invasion of Scotland and France at Edward's behest, kept him busy and often away from the family home at Middleham Castle in Yorkshire. Surviving letters show that Anne took charge of the household and estates in his absence.

Sometime between about 1474 and 1476, a son was born whom they named Edward. However, it seems that Richard already had other, illegitimate, children with mothers unknown to us, probably born before he married Anne. He himself acknowledged that a John of Gloucester and Katherine Plantagenet were his children when he arranged a job for John and marriage for Katherine. 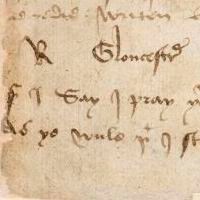 Illustration: Request for a loan written by Richard to Sir John Say, 'Sir J. Say. I pray you that ye fayle me not at this tyme in my grete nede...' 23rd June 1469 © The British Library Board, Cotton MS Vespasian F iii

Town and Duke save Edward IV

In March 1471 Richard and Edward returned to England to deal with their rivals once and for all.

They were opposed by the forces of Warwick the Kingmaker and the Duke of Clarence. First they encountered Clarence near Banbury. However instead of fighting, it is recorded that the three brothers publicly embraced to show that they were reconciled. The encounter with the Kingmaker became the Battle of Barnet. 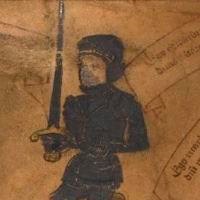 Although Richard was slightly wounded at Barnet, his leadership of the right flank of Edward's army contributed to their victory. The Kingmaker was killed, Edward was back on the throne, but still he was not safe.

On the very day that Richard was fighting at Barnet, Margaret of Anjou, wife of the deposed Henry VI, had landed at Weymouth to make her own son King. She had to get to Wales. Edward had to stop her because if she could join with her Welsh allies then her forces might be too powerful to defeat.

Gloucester became vital to the survival of both sides. The town's bridges were the first opportunity Margaret could have of crossing the River Severn into Wales. So she arrived at Gloucester with her soldiers and demanded to be allowed through. However the city stayed loyal to its Duke and refused. Margaret had no choice but to find another crossing point. The nearest was Tewkesbury but the delay at Gloucester had allowed Edward to catch her up. In the battle of Tewkesbury that followed, Richard Duke of Gloucester and his men played a decisive role in the vanguard of his brother's army. Margaret was defeated and Edward IV was more secure.

Illustration: Manuscript from the library of Blackfriars, Gloucester showing Edward IV in armour and Richard in ermine robes. From The Genealogical Chronicle of Edward IV, c.1460-70 © The British Library Board, Harley MS 7353

In 1478 Richard's brother, Edward IV, had the middle of the three brothers, the Duke of Clarence, executed for treason.

He was buried in Tewkesbury Abbey having been, it is said, drowned in a barrel of Malmsey wine. While Shakespeare's play blamed Richard for arranging it all, there is no evidence that he was involved. However, it did mean that Richard Duke of Gloucester was now third in line to the throne behind Edward's sons: Prince Edward and Prince Richard.

The Princes in the Tower

In 1483 a crisis came, Edward IV died. Now Prince Edward became Edward V, but he was only twelve years old and vulnerable. 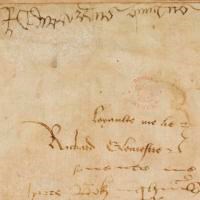 His uncle Richard rushed south to take charge of the young King as 'Lord Protector.' According to one chronicler he was mindful that the previous Duke of Gloucester had done the same for Henry VI sixty years before. The events that followed are controversial.

Edward's coronation had been planned for 4th May, but that was the day Richard and Edward arrived in London, so it was postponed until 22nd June. While preparations for the ceremony were being made, Richard revealed that a plot had been found against him. A round of arrests of Richard's rivals followed. When the 22nd of June arrived, Edward was not crowned, instead a churchmen revealed to the people of London that he believed Edward's father had married illegally making Edward illegitimate and barring him from the throne. At this news petitions were raised that Richard be King. Within four days Richard Duke of Gloucester was recognised as Richard III 'by the concord assent of the Lords and Commons'.

As for the boy who had been Edward V and his brother Prince Richard, they were sent to the Royal apartments in the Tower of London. After some weeks they were never seen or heard of again. What happened to them has intrigued historians ever since.

Two weeks after his coronation, Richard set out to tour his Kingdom. 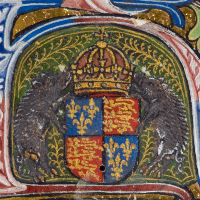 At the end of July 1483 he arrived in Gloucester. It seems that the days he spent here may have been a turning point in his short reign.

Beginning of the End

Richard and his closest lieutenant, the Duke of Buckingham, ''departed, as it seemed very great friends, at Gloucester' on about the 2nd August 1483, according to the Tudor statesman Sir Thomas More. However Buckingham had departed to rebel. Although the rebellion failed with Buckingham's men bogged down by the Gloucestershire floods, it caused some of Richard's key supporters to doubt him. Eventually Henry Tudor was able to exploit the weaknesses it exposed to topple Richard from the throne in 1485.

What happened at Gloucester between Richard and Buckingham has puzzled generations of historians. Perhaps the answer lies at Llanthony Priory on the edge of the city. Here were the tombs of Buckingham's ancestors: the de Bohuns. As he prayed beside them he may have been reminded of his own royal blood and famous relatives who had successfully rebelled against King John and Richard II. Their deeds may have come up in conversation with the Prior, Henry Dean, a man who became one of Henry Tudor's most trusted ministers and Archbishop of Canterbury.

Beginning of a Crime, or a Slander

Later when the Tudors accused Richard of murdering the `Princes in the Tower', it was in Gloucester that Henry VII's official historian Polydore Vergil had Richard conceive of the evil plot:

'And first he went straight to Gloucester, where the while he tarried the heinous guilt of wicked conscience did so fret him every moment as that he lay in continual fear, for the expelling whereof by any kind of means he determined by death to dispatch his nephews, because so long as they lived he could never be out of hazard'

Illustration: Arms of Richard III. From a manuscript of 'Vegetius De Re Militari or Vegecy of Dedes of Knyghthode' prepared for Richard's son, c. 1483-1485 © The British Library Board, Royal MS 18 A VII