The Elmbridge Court roundabout between Cheltenham and Gloucester is already one of the busiest traffic junctions in the county. The purpose of the proposed scheme is to tackle this congestion 'hot spot' on the A40 and to reduce journey times and improve reliability for vehicles travelling between Cheltenham, Churchdown, Gloucester and beyond.

Latest news on this scheme

The scheme proposes a series of improvements to Elmbridge Court roundabout to improve its capacity:

In agreement with the DfT, the county has prioritised the roundabout improvement works, working with Highways England to complete the detailed design and technical approvals, to enable a summer 2016 construction start date. The Park and Ride element of the scheme is currently contained within the draft Local Transport Plan (LTP) 2015-2031 as a county-wide capital project. Following the conclusion of the public consultation, and anticipated adoption of the LTP by GCC in July 2016, the building of the Park and Ride would be subject to the availability of new external funding and the approval of a business case.

The current programme for the Elmbridge Court Roundabout Improvements is as follows:

See the layout designs below.

If you have any further questions then please contact us by e-mailing elmbridgetransport@gloucestershire.gov.uk 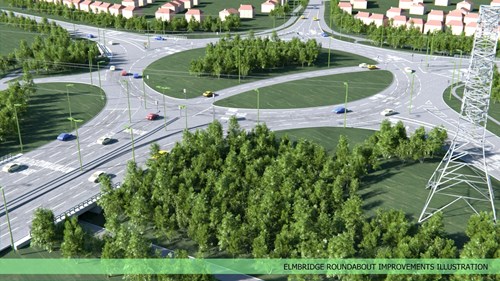