In Gloucestershire we have around 60,000 streetlights which consume around 20.5GWh of power each year at a cost of £2 million. Electricity costs are rising sharply, and we are spending more and more just to keep the street lights on in the county.

The council has adopted a Carbon Reduction Target of 60% by 2020/21 when compared with our 2006/07 figure, which will only be achievable with significant reductions in the energy consumption of our street lighting.

In August 2014, Skanska were appointed to deliver Gloucestershire's LED lighting scheme and undertake the general maintenance of the council's street lighting, lit signs and bollards. By making the decision to adopt LED street lights now the council anticipate financial savings of about £17 million over the next 12 years. Work to roll out 55,000 LED street lights across the county began in November 2015 and is expected to take three and a half years to complete.

The benefits of using LED street lighting include:

Investment in LED street lighting was approved as part of the Council Budget for 2014/15 to 2016/17 by the county council on 26 February 2014. At the cabinet meeting on 23 July 2014 approval was given for the council to procure a 12 year contract to replace our street lighting with LED technology, and to provide maintenance.

We would welcome your views on the recent LED street lighting replacement work.  To take part in the short survey please click here - the survey should take around 5 minutes to complete. 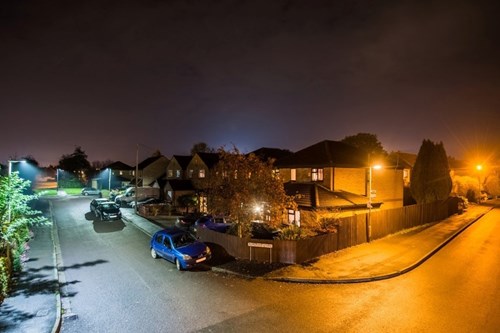