Ash is the third most common tree in Britain and there are up to 60 million ash trees outside woodlands in the UK. Ash Dieback was first officially recorded in the UK in 2012, with only a small fraction of trees proving resistant.

Ash trees are very common in Gloucestershire, and is commonly found in parks, gardens and hedgerows.

The disease is particularly destructive of our native common ash. The disease affects the structural integrity of a tree, this can create health and safety risks as tree’s becomes brittle, losing limbs and in more sever cases causing the tree to fall.

Gloucestershire Highways launched the Ash Dieback Project in 2020, to start to tackle the affects of this disease, to keep the public highway and county council land safe. 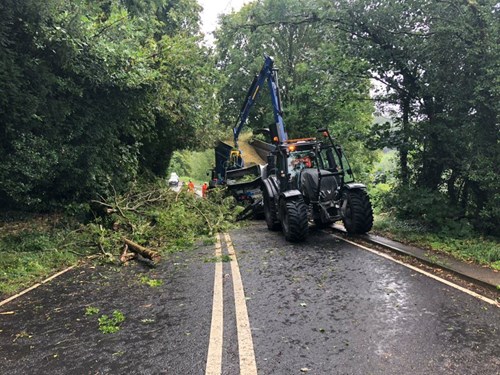 What is ash dieback?

Ash dieback damages the structural integrity of a tree; the disease causes leaf loss and crown dieback in affected trees and can lead to the death of the tree. These diseased trees have an increased risk of collapsing which can be dangerous, especially if they fall on a road.

Our crews are carrying out essential work around the county to remove unsafe trees that are infected with ash dieback.

It is estimated Gloucestershire Highways has between 27,000 to 32,000 ash trees, which will require attention over the coming years. 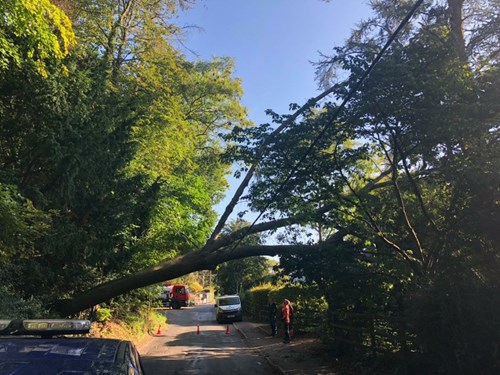 In line with Gloucestershire Local Nature Partnership (GLNP), Ash Dieback Position Statement. A set amount of vegetation including wood and chippings, are left on site for habitat and biodiversity reasons, to aid natural regeneration opportunities for replacement tree cover.

The Ash Dieback team have undertaken extensive surveys, and can report seeing promising evidence of natural regeneration upon numerous sites. GCC Highways will continue to encourage natural regeneration from the natural seed bank present in the soil, especially where infected ash trees have been removed in large numbers.

Within the capacity of the Ash Dieback Project, the team will identify areas suitable for replanting on Gloucestershire Highways land. We encourage the planting of native broadleaf species, planting whips when they’re dormant and so less likely to get damaged. The planting season runs between November and March.

The local parish councils are encouraged to work with the ash dieback team to identify other land suitable for replanting, and consider requests for donation of whips to support local community replanting / ecology projects.

In addition to the ash dieback project, a wide scale tree planting programme is being developed as part of the county council’s climate change strategy. The Million Trees Challenge is our aspiration for one million trees to be planted across the county by 2030, working with members of the Local Nature Partnership.

Ash Dieback can affect ash trees of all ages. Younger trees succumb to the disease quicker but in general, all affected trees will have these symptoms:

In these instances, then unfortunately the maintenance/felling of these ash trees is to be met by the land owner as these will be considered as belonging to them.

I have received a letter about ash tree(s) on my property, what should I do?

Contact your local independent ARB approved contractor, to assess the tree(s) and arrange for works to be carried out as stipulated in your letter.

Which trees do I need to act on?

Our tree safety officers, will identify infected ash trees, which are a cause for concern and within falling distance of the highway. Photographs will be taken as evidence and included in letter(s) sent to private landowners along with a location plan. Where it is safe to do so the tree(s) or highway will be marked in red paint to identify the area of concern.

We would encourage land owners with trees adjacent the highway to carry out visual inspections of their trees, on a regular basis.

Street works team should be informed of any works being carried out on the public highway, and should know who is carrying out the works, the duration of the works, and the type of traffic management is being used.

How road closures may affect you?

We understand that road closures might cause some disruptions to you and may interrupt your regular journeys, however it is necessary in order for to carry out the tree works safely.

Will we be able to drive back and forth from our property while the road is closed?

As the works involves felling of trees and large equipment, we will be unable to allow traffic through the Road Closure. If you normally drive into or out of the Road Closure during the hours when the closure is in place, we ask you to please make alternative arrangements.

In exceptional circumstances, some level of access may be considered on a case by case basis but only where it does not impact our ability to undertake the necessary works and where it is safe to do so. Please see the FAQ leaflet for further details.

Where am I expected to park while the road is closed?

I have a business, how will the affect me?

We appreciate that any road closure could have an impact on business operations, however to deliver the works as quickly and efficiently as possible, we kindly ask you to work with us. To help us to complete the works with the least disruption to you, we ask you to:

Working in collaboration with National Trust

The works will be undertaken across 20 different sites, during the course of 2021.

My question hasn’t been answered here?

Alternatively call our helpline on 0800 0514514 if you cannot find what you’re looking for.