Libraries are open for public browsing and computer access. To check your local library opening hours, and services on offer please check Library Locations and Opening Hours. Some services may continue to be a little different in the coming months but we are working hard resume services when it is appropriate to do so and this website will be updated regularly. 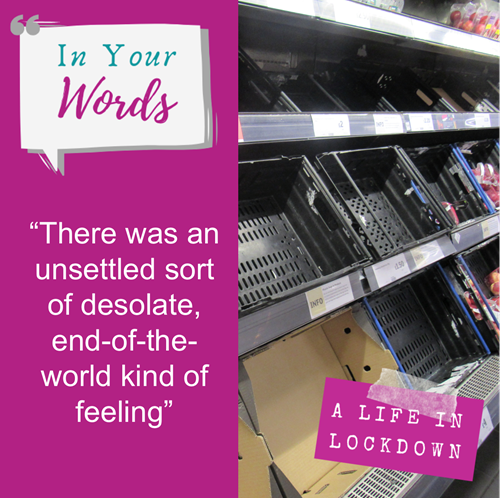 Flashback in Sainsbury's by Helen Rana

At the start of the lockdown people’s panic stockpiling stripped the shop shelves bare. On a rare early trip to my local Sainsbury’s I had a flashback to a supermarket 7,500 miles away.

I was living in Zambia’s capital, Lusaka, one of the fastest-growing cities in southern Africa. Although it had multi-storey buildings, vehicles and potholed roads, it lacked the basic amenities that we take for granted here, such as universal healthcare, reliable phones and internet, drainage and rubbish collection. The things that are getting us in Gloucestershire through the pandemic.

As a mzungu, a white person, I stuck out like a sore thumb. On my frequent visits to rural villages where people lived in rondavels (round huts made of earthen walls and thatched roofs) without access to roads, water or electricity, I was viewed as an intriguing specimen. People marvelled at my poor pallid skin that burnt red in the hot sun and listened to – but didn’t believe – my account of being unmarried and childless in my mid-thirties. In the city I was seen by opportunists as a way to make money. Beggars, traders, entrepreneurs and others would approach me from the second I stepped outside my flat, so I never once walked anywhere on my own. This became intensely annoying very quickly and I started to feel some sympathy for those famous celebrities who just ‘want to be alone’.

Money was pouring into Zambia from the Chinese, who were building roads, investing in mines and providing doctors to fill the gaps left by the dearth of poverty- and AIDS-affected locals. All part of their ‘Belt and Road Initiative’. Meanwhile, South African companies were building shopping malls and introducing global brands like Nando’s and ShopRite to the nation.

It was an exciting day when a new supermarket opened up near my flat, so I set off to visit it with high hopes of buying some sorely-missed delicacies. I soon collected a gaggle of interested companions – a group of young orphans who lived on the street, adept at surviving despite the harshest odds.

‘You are really struggling in my country,’ one observed.

I didn’t feel able to comment on the irony of this. He was sleeping rough, wearing threadbare hand-me-down clothes that had been sent to Zambia because they were unwanted in British charity shops. He had no family, no home, no food, no money, yet he perceived me as someone in trouble because he only usually saw mzungus driving past him in four-wheel-drive vehicles. A white woman walking alone was a bizarre aberration.

They accompanied me to the edge of the shopping mall and stopped, aware that they would be chased out of the car park by the armed security guards protecting the site of the new store.

I went inside alone. There were very few shoppers. Most of the shelves were empty. There was an unsettled sort of desolate, end-of-the-world kind of feeling.