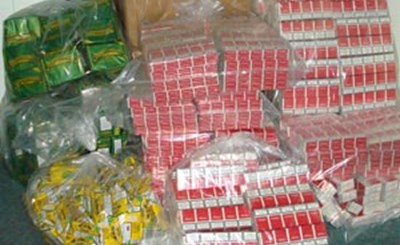 Mr Said was the owner of the local store, Asian European, in Eastgate Street, Gloucester.  Between October and November 2016 officers from Gloucestershire Trading Standards service inspected the premises and seized 647 packets of cigarettes and 112 pouches of hand rolling tobacco.

In May 2017, Mr Said also took ownership of Costless, 82 Eastgate Street. Between May and July 2017 Trading Standards carried out three test purchases and five inspections which resulted in the seizure of 761 packets of cigarettes and 256 packs of hand rolling tobacco.

Mr Said was prosecuted on 21 December 2018 at Cheltenham Magistrates’ Court for 22 charges and was sentenced to 12 weeks in prison which was reduced to 8 weeks for an early guilty plea.  The sentences are to run concurrently.  Mr Said was also ordered to pay prosecution costs of £1,713.30 and a victim surcharge of £115 (to be paid on 15 February 2019).

The Magistrates found that this was a first offence as it predated his conviction for similar offences in Hull in August. The Magistrates felt that there was a large number of counterfeit items and substantial gain for either him or others that carried on for a long time despite the warnings. Given those reasons they felt there were no grounds for suspending the sentence.

Costless, 82 Eastgate Street, Gloucester has closed down shortly after the actions taken by trading standards officers.  Asian European Store has been subject to two closure orders since Mr Said left the premises as subsequent owners have continued to sell illegal tobacco.

Councillor Dave Norman, Cabinet Member responsible for trading standards said: “This example shows that we are serious about taking action whenever we find anyone selling illegal tobacco”.

“The sale of illegal tobacco not only avoids taxation, it also undermines legitimate businesses in Gloucestershire and puts money into the hands of criminals deliberately flouting the law.”

Anyone with information on the sale of illegal tobacco, however small or insignificant they might think it is, is encouraged to report it by calling 03454 040506 or anonymously via our website https://www.gloucestershire.gov.uk/trading-standards/report