Working together to stub out illegal tobacco 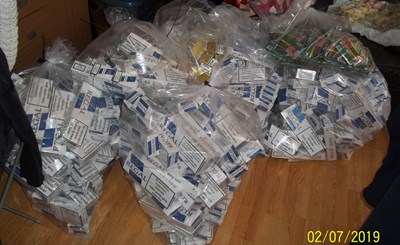 Following reports received from the local community about the sale of cheap tobacco, on 7 February officers searched several residential houses in Linden and Hempsted, resulting in the recovery of 59,720 illegal cigarettes and 12.65 kg of hand rolling tobacco as well as a vehicle which had been used to store the tobacco. The vehicle was subsequently seized by HM Revenue & Customs.

“Our trading standards officers continue the fight against illegal tobacco sales. We will not tolerate the sale of illegal tobacco in Gloucestershire which poses a significant risk to public health as well as undercutting legitimate law abiding traders and taking money from the public purse which funds the vital services we all rely on.”

“This is another successful operation against those who choose to trade in illegal tobacco. I’m really grateful to the local community for their valuable information which helped us to achieve this great result.”

“Trade in illegal tobacco undermines legitimate traders and starves the UK of money which should be used to fund our vital public services. We will continue to work closely with partner agencies such as Trading Standards to clampdown on the illicit tobacco market, which costs the UK around £2.5 billion a year.”

Enquiries will now continue and if anyone has any further information please report it to Trading Standards on 03454 040506, email tradingstandards@gloucestershire.gov.uk or get in touch anonymously via their website quoting ‘Operation Crab’.