Covid-19
Information on Covid-19
Book to get a test
Recruiting care workers
UPDATE: Restrictions on emails have been lifted

We now have sufficient confidence our systems and servers have not been affected by the recent cyber attack on our ICT provider, Sopra Steria, that we have lifted the block on external emails.

As you would expect, there are a large number of emails that have been quarantine but work is well under way to release them and should be completed by the end of tomorrow (Friday).

Thank you for your patience and support whilst we have worked to safely resolve the situation.

If you need us urgently, please call us.

First, you need a clear understanding of the difference between Report Filters and Site Segments:

Report Filters: allow you to filter the items on a report based on some dimension or metric in that report - they look at items in the rows of the report table like 'Page' and 'Page Views'.

Site Segments: allow you to filter traffic (like 'Users' or 'Sessions') that fits some non-metric/dimension criteria like 'sessions that have visited page X' or 'users between 55 and 64'. These do not filter based on the content of the report.

So far we've used simple searches that allow you to use a single word or phrase & filter the report. This is fine for the quick reports discussed on the 'Google Analytics' page but the filters are too restrictive for most reports. Google Analytics offers advanced filters to allow more targeted filtering.

This slide-out has three selectors and a text box that allows for quite powerful queries.

Offers a list of items on which you can filter - this list will change depending on which set of data you are examining: 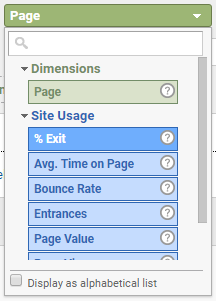 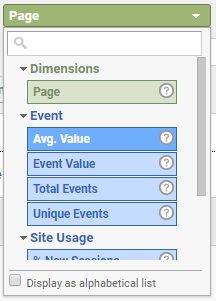 Depending on the list you are presented with you may be able to filter your list by:

Allowing you to use various types of query

Of these, only the 'Matching RegExp' is not obvious. A regular expression looks something like:

This uses several common regular expression elements to build a text string that looks for matches to patterns in the text strings in columns of the analytics report table.

This is a very simple version. See 'Regular expressions' for a longer version.
Google also has a succinct explanation of the basics in Analytics Help and W3Schools has a handy short reference.

Broken down the above string means:

This character means 'start of string' so…

…means a string starting with 'something' eg

…because 'something' is not at the start of the string!

The character '$' serves a similar purpose except you use it to specify 'at the end of the string'. So…

This is two characters (not a 'V') - '\' in RegExp means the next character is as entered, even if it would normally be treated as a 'special' character. Doing this is not required for a forward slash '/' but is both harmless and safer than assuming a '/' won't be treated as 'special'.

So this pair reads as a /

You must use '\' before the following special characters

So to search for 'index.aspx' you would have to use 'index\.aspx'.

. - the dot character means 'any character'

Together they mean a string of any number of any characters (anything or nothing).

You can also specify:

Segments allow you to restrict the activity under report to things which are not dimensions or metrics on the report. A good example of this is how you answer the question 'How many 'people' visited our page'.

As you can see the Audience overview report shows 'Users' which is the best measure of how many 'people' visited your site. A less useful measure is 'Sessions' which tracks individual visits but not whether the visit is from someone who has been there before (a User).

However, your page does not appear anywhere on this report which also has no explicit 'filter' option. To find how many of the users on this report visited your page you need to apply a segment before running the report. 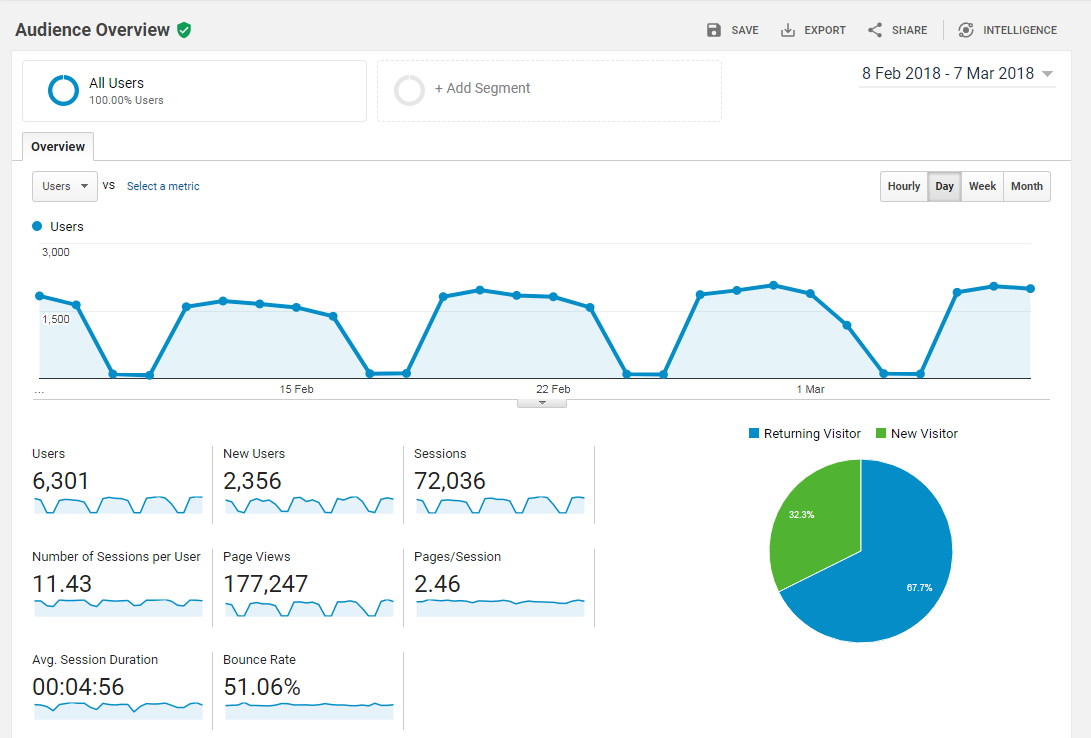 You can add and edit segments from the segment panels above the report. If you believe that the segment exists, hit the 'All users' panel & you'll see a list from which you can select. It's possible to select more than one segment but you need to know what the effects will be if you are going to do this.

If you need to set up a new segment, hit the red button. The configuration panel offers options for:

The simple options are obviously simple to set up so here we just consider how to use advanced conditions to filter to users with other characteristics.

'How many 'people' visited our 'HR Handbook' home page on Staffnet in the final quarter of 2017?'

You have your answer: roughly 2000
(Remember the accuracy limitations of Google Analytics) 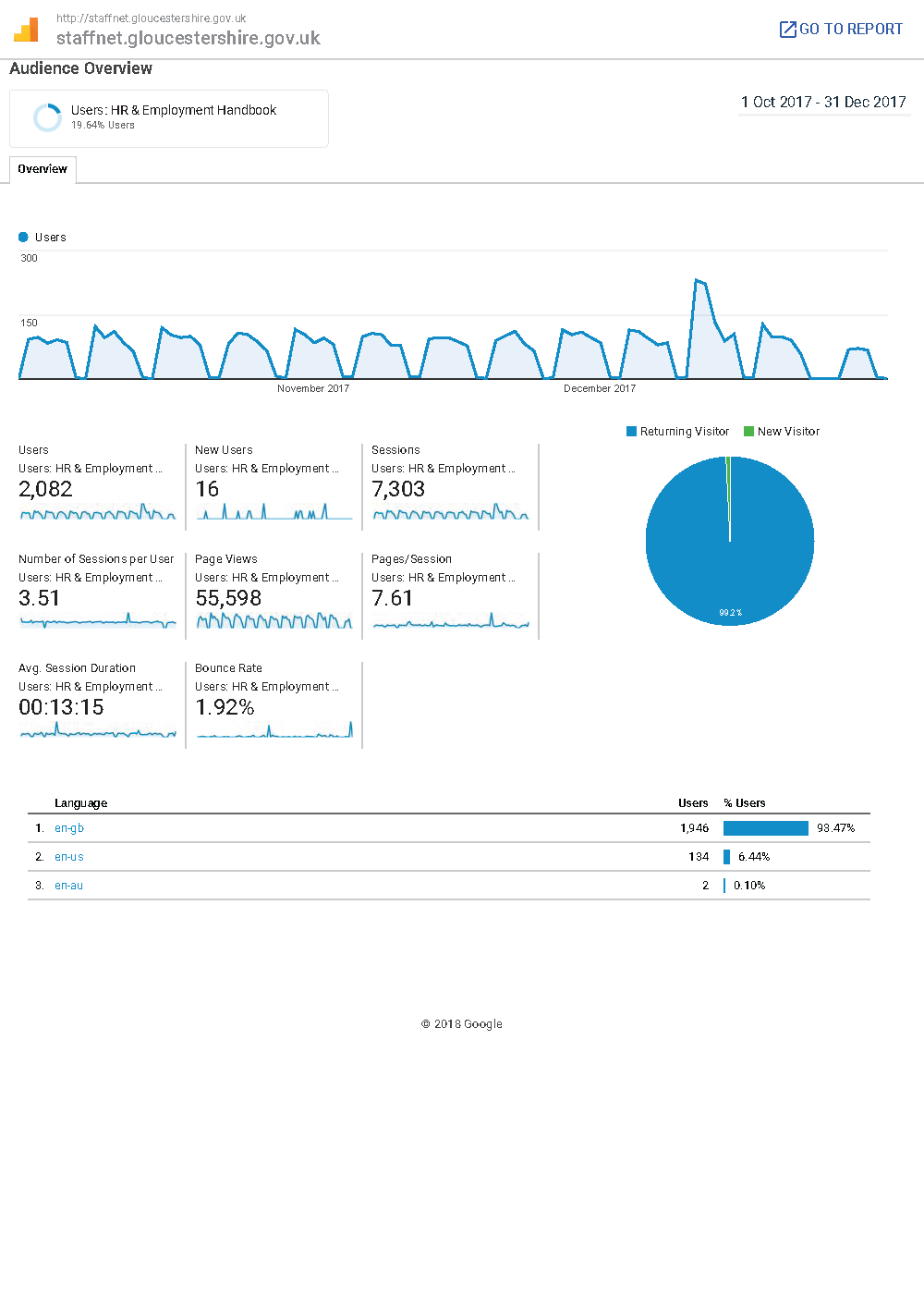