Stay up to date with what's happening by signing up to our scheme email bulletin.

The B4063 Gloucester to Cheltenham Cycle Improvements Scheme started as a Highways England project with the strategic aim to link the major areas of Gloucester and Cheltenham and the villages in between.

A series of ring-fenced funds have been designated by Highways England to invest in cycle infrastructure. A study was done in 2015/16 to assess the most continuous, direct, comfortable, safe attractive route for cyclists of all abilities and the B4063 was selected as the preferred route (near the A40 strategic corridor). The A40 is not suitable for a cycle route due to high speeds and the motorway junction.

Highways England completed preliminary design which has been passed to Gloucestershire County Council and their design team at Atkins for further development. Detailed design is due to be completed during the 2020/21 financial year for construction in 2021/22.

The B4063 runs between Gloucester and Cheltenham and a segregated cycleway here will help cyclists of all ages and abilities to travel safely. It will link up the cycle route along London Road in Gloucester, which is also funded by the Government (Emergency Active Travel Fund, Tranche 1), to cycling improvements along the A40 in Cheltenham. It will give a continuous route for cyclists and make cycling and sustainable travel more appealing; helping to get people out of their cars, improving the amount of traffic in the area.

The new cycleway will be accessible to all, aiming to improve health and wellbeing in the community while reducing Gloucestershire’s carbon emissions. If there’s less traffic around, buses are more likely to be on time too.

The route will help people reboot their commute, as it will link up Churchdown, Innsworth and Staverton to public transport hubs in both Gloucester and Cheltenham. The route also links up with many different work places, Gloucestershire Royal Hospital, and University of Gloucestershire campuses.

The proposed route can be split into two sections:

End to end two-way cycle track on northern side of the B4063 carriageway made up of:

A segregated cycle track in locations with a higher density of pedestrians (through Churchdown).

Final design details are to be agreed following further discussions. These sections may not be delivered in numerical order.

The public engagement for this scheme will be completed in two parts. Thank you to everyone who sent us feedback and commented on our designs for part of this scheme. Our survey on section 2-4 between Elmbridge Court Roundabout and Arle Court Roundabout has now closed. We are taking the time to go through all your comments. We will consult on section 1 later this year, and everyone will have the opportunity to comment. Your feedback will help shape the scheme going forward, making sure the final plan provides a safe, convenient and direct route between Gloucester and Cheltenham. 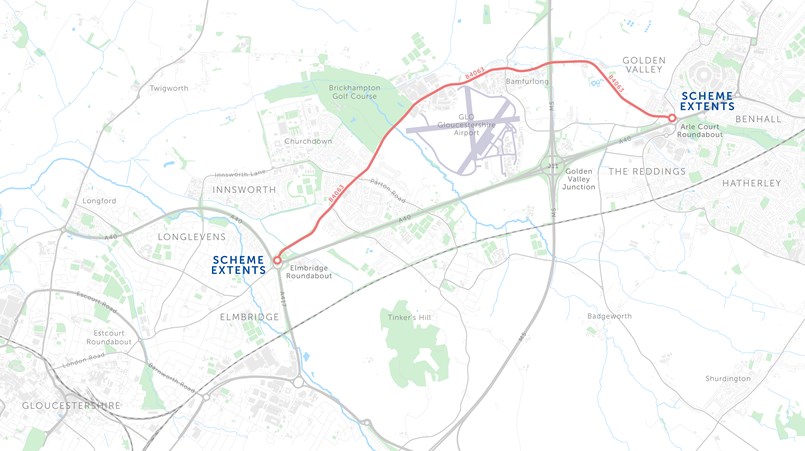 Funding for scheme design has been fully secured from Highways England Designated Funds. Construction costs have also been partially secured from multiple sources and other funding contributions are currently being found. Gloucestershire County Council will be co-funding this scheme.

Highways England has done some outline consultation on the scheme during their preliminary design phase. This included talking with local MPs, GCC officers and presentations of the scheme to the GCC Cycle Advisory and Liaison Group, whose membership includes county councillors, cycle groups and cycle organisations.

The scheme has the support of local MPs and has been raised as a key project during Prime Minister’s Questions.

Further engagement exercises with lots of different people will be completed during detailed design so the views of local residents, businesses and commuters can help us to finalise the route. A feedback survey on new scheme designs for sections 2-4 has been completed.

Further information and how to get involved with this scheme